A Domination is a reward granted to players who kill, or assisting in killing, one particular opponent four times without said opponent killing or assisting in a kill against the player in the process. When a player dominates an opponent, a distinct sound cue is heard and the player becomes the opponent's Nemesis. A small target icon appears next to the dominated opponent on the scoreboard. If an opponent dominates the player, a slightly different sound cue plays. An icon of two fists appears on the scoreboard, as well as the same icon, albeit team-colored, above the player's Nemesis. When a player kills their Nemesis, or assists in killing them, the opponent loses their Domination and status as Nemesis; this is known as a Revenge kill.

Dominations in one life are counted in the all-time stats. When dominating opponents, a medal symbol appears next to the player's name on the scoreboard along with a number indicating how many opponents the player is currently dominating. Dominations are carried over map stages, but not over team or map changes. Team-swapping causes all Dominations for and against the player to be lost.

Dominating someone may sometimes produce a special audio response from the player's current class. Dominating several people in one round results in increasingly enthusiastic responses from the character being played.

When an opponent becomes the player's Nemesis, they sport a distinctive icon above their head, allowing the player to identify them (unless they are currently a cloaked or disguised Spy). Only the player being dominated can see this icon. If the Nemesis kills the player, the Deathcam identifies them as such, and state that the player has been killed "again" by them.

It is possible to have any number of opposing players as Nemesis at once. Upon killing a Nemesis, players gain a Revenge kill, which counts towards their player stats, and the opponent loses their status of Nemesis.

The Nemesis feature was added to promote relationships between players, creating a small negative reinforcement loop by giving players an opportunity to score extra points with a Revenge kill.

got REVENGE on
Soldier 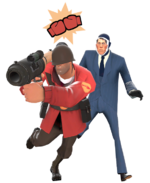 Killing a Nemesis is called a Revenge kill. This is accompanied by a short sound cue and a special kill notice on the HUD. Obtaining a Revenge kill also produces a short audio response by the player's class.