Note: There are some discrepancies regarding c_, v_ and w_ models. Previously, all weapons had a world model and a view model that were kept separately. Most newer unlockable weapons, and a number of stock weapons use a single model file (c_model), which is used for both the player's viewpoint and for what other players see you holding. The Kukri and Flame Thrower had their view model and world model files removed when the change to c_models occurred.

The rotate lighting control should be used with caution. It's okay to slightly adjust the lighting to add more "depth" to an image, but do not rotate it too drastically or the image will look way too dark in comparison to other images uploaded to the Wiki. It's also recommended to use it to adjust Pyro's lenses, as it tends to appear completely white in certain angles. 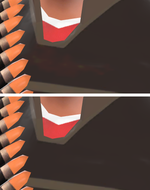 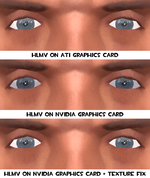 Cubemaps
HLMV handles reflective surfaces by using a texture to fake reflections. The default texture is that of a sunrise -- nice, but not quite clean enough for good, readable photos.
To rectify this, download this texture replacement, and copy the contents to \Steam\steamapps\common\Team Fortress 2\tf\custom\. This will replace the reflection with a morose grey, making for more readable photos.

hlp_forearm_L and hlp_forearm_R
Some cosmetic items contains bones that attaches to non-functional bones in HLMV, cosmetics that contains the bones hlp_forearm_L and hlp_forearm_R often causes problems in rendering when attaching to a class model, usually causing the cosmetic to pass through the class, or stretching on the ground.
To fix that, a simple modification was made on the models for Scout, Demoman and Heavy, to remove these problematic bones. These were fixed for both normal and hwm models. The fix can be downloaded here. To install it, simply copy the .vpk to \Steam\steamapps\common\Team Fortress 2\tf\custom\.

Gray cornea (issue with NVIDIA graphics cards mostly)
For some users, mostly those with NVIDIA graphics cards, HLMV may have problems rendering the texture for the cornea of each of the classes eyes, causing it to appear with a gray tone instead. Currently it's unknown what causes this issue, but it's possible to fix it by downloading a modification for the eye_lightwarp texture.
To fix that, download this texture replacement, and copy the contents to \Steam\steamapps\common\Team Fortress 2\tf\custom\. This will make the lightwrap texture brighter, fixing the issue with the gray cornea for those using a NVIDIA graphics card.
Note: This will not fix issues with other items with the same issue, such as the Lord Cockswain's Novelty Mutton Chops and Pipe appearing completely black, and the Quick-Fix missing its transparent visor. The fix only applies to the classes' gray cornea issue.