Did anyone notice when in Meet the Sniper when he flicks the bobblehead that the one next to it is Old geezer. Here's an image to prove it. 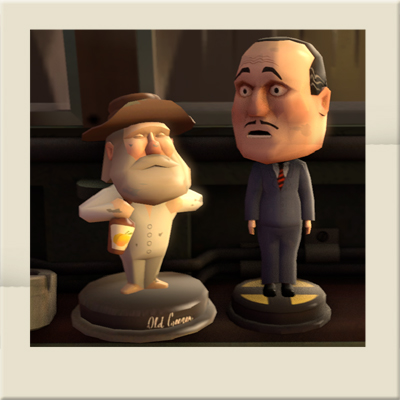 I want you to go back to that video, and tell me exactly where you see Old Geezer. --

right when he flicks the civilian bobblehead.the Old geezer bobblehead is right next to it in the picture. THE3STOOGES/HAMMERHEAD 02:13, 7 April 2011 (UTC)

Go to the VIDEO, seriously, right now, watch it --

It was never there, that image is just concept art --

oh it was replaced because they were afraid people wouldn;t get it. THE3STOOGES/HAMMERHEAD 02:19, 7 April 2011 (UTC)

Yes, and it blows my mind that you still don't know how to tab over your comments properly --

Should Sarif Industries be included in this list? You can find their logo in game, it's visible on the Heavy's Purity Fist, but I thought I should ask here before adding them to the list of companies, as they don't seem to have quite the same level of involvement as everyone else on this list to me. -Mr. Magoolachub 06:07, 20 August 2011 (PDT)

I think it falls under "Some companies have no properties, but appear on advertisement posters in-game or in promotional materials." Rolandius 06:18, 20 August 2011 (PDT)

I wouldn't list it here since the company has nothing to do with TF2 beyond appearing on that hat. You'll notice there's also no entry for Monday Night Combat, Aperture Science, or whatever company Ellis works for. --

Does anyone remember if Mann Co.'s rival company was named in the Spiral Knights/Team Fortress 2 promotion? If so, that could be put here. Rolandius 06:22, 20 August 2011 (PDT)

Like I didn't already look at those? Sort of why I asked here if there was anything out there that named the company. Rolandius 19:04, 20 August 2011 (PDT)

The coop logo strongly resembles the Tecmo Koei logo so I'm going to go ahead and change it from "none". I'm just putting the reason behind the edit here. --Mattwo 20:09, 20 September 2011 (PDT)

This is incorrect. The logo is an actual real logo still used by some local grain cooperatives. It was the logo of the Double Circle Cooperative, which went defunct in 1985. But, it is still a common sight in rural America. The logo pre-dates Tecmo by over 40 years. Dzcomposer 11:24, 7 February 2012 (PST)

It may be a reference to the character of Captain Dan from Forrest Gump. I'm not sure, but it's the only prominent Captain Dan that I know of. Kane.malakos 20:49, 11 October 2011 (PDT)

Just to be clear (no pun intended), given the rather poor qualities of the logos (e.g. Telemax, Red Shed Beer, Blu Streak Beer) is it illegal to upload fan-made higher quality versions that follow the exact specifications of the original?

The quality of these pictures varies widely and does not lead to uniformity nor consistency (see the outlines of Red Shed Beer and Blu Streak Beer) within this wiki.

Are we truly stuck until Valve decides to release higher quality versions?

If this is true there needs to be a distinct warning to prevent budding,young graphic designers from uploading images that would go against such "purity". Upgrade 15:28, 8 February 2012 (PST)

The poster of "farmers elevator" is actually a real company. It is a grain elevator company that stores corn and soy beans KplKabbage (talk) 06:53, 9 April 2014 (PDT)

Yes, I agree, conditionally. Farmers is a generic name for a number of actual elevators, co-ops, banks, insurance companies, and retailers. There are several real retailers with the name Farmers Feed & Seed Co. or variations thereof (I know, I cold-called most of the ones could find numbers for to find out if they are a chain (they are not)).
Moreover, the green "hand shake"/"train coupling" is also a real icon, I know I have seen it in the 80's, and my farmer family (with a long history of founding cooperatives) recognizes it, but no one can remember the company's real name or where they saw it.
Another issue I have is the question of which TF2 maps these are on -- yes, I have not completely studied every map, but I don't think I've seen these in game. I would happily update the article if someone tells me what game map they are one. Mikado282 (talk) 04:01, 10 April 2014 (PDT)

I see... around where I live, there are plenty of grain elevators with that logo. One good example is "Farmer's Co-op Society." I actually deliver soybeans there sometimes. KplKabbage (talk) 07:21, 10 April 2014 (PDT)

Do me two favors then. Find one instance of it on an official TF2 map. And find one URL to a photo of the green handshake logo, I can't find one. Every pic I find for "Farmer's Co-op Society" has a completely unrelated logo. Thx. Mikado282 (talk) 18:35, 10 April 2014 (PDT)
Before we further embarrass ourselves ... A number of these cleaned up versions of real world signs were uploaded by one person in July 2010. The uploader says on his talk pages that they were his signs on earlier maps. I can’t find them on those maps, they might have been replaced by later updates (say by Australian Christmas 2011)? I’d ask him but his talk page hasn’t been active since early 2011. Mikado282 (talk) 20:41, 10 April 2014 (PDT)

"I don't think someone would take a picture of a grain elevator just for a logo" try googling that sometime, there are a lot of elevator logo pictures, try putting the following into the search:

Don't sweat it. I've messaged the originator, who hasn't been active on tf2maps.net for a while. Some of these real world signs have probably never been published on a map, anyone knowing otherwise, chime in (I know some have been published). I got the impression from a couple tf2maps.net posts that using Farmer's Elevator was something of an in-joke. Mikado282 (talk) 19:16, 11 April 2014 (PDT)

I have been looking at multiple grain elevators in a bunch of small towns, and i noticed that a vast majority have them, yet like you said, it could be a gag. KplKabbage (talk) 06:47, 22 April 2014 (PDT)

No evidence has been presented that the following company signs have ever been displayed in a released, official game map.

Each of these is adapted from real business signs of the 60s or earlier. I have personally seen the original sources of all of these signs, most of them as a youth. Each of these were uploaded by the user (a prolific and valued editor of the day) called editor that sourced them from real life signs. That user claimed they went official with Hoodoo, but the signs listed above are not found on that map, nor in any screen capture of that map on this wiki. I am all about IRL nostalgia, but I want to know if there is any reason these 6 companies should not be removed from this list. Mikado282 (talk) 21:32, 11 June 2014 (PDT)

There is a difference between "Redstone Cargo" and "Red Stone Cargo". It just depends on how you read it, so I don't think it's a reference.

Redstone references several related things, none of them having anything to do with Minecraft. In the real world, towns were named Redstone, after local red sandstone, shale, mudstone, quartzite, scoria, or granite, like that dominating TF2 maps. Redstone Arsenal was named for the local red soil and stones in that location. The Redstone rocket (which the sd_doomsday rocket very loosely resembles) was named for the Redstone Arsenal. In the 1960s Space Punk, which influences TF2 art, it was not uncommon to name companies after space programs.
So, all of these references are natural and consistent with the art and theme of TF2, but none of these references are documented (AFAIK) or particularly notable (except as TF2 art influences). And the sign was released long before sd_doomsday. From the TF2 logo itself, it is a clear reference to natural red stone, which is abundant on the TF2 maps; so, in my opinion, explicit documentation would be required to say that this TF2 company is a reference to Minecraft (even so, it would still be a multiple reference). There are mines all over TF2 maps; are those mines a reference to Minecraft or to all the red rock mines that that dotted New Mexico and Colorado upon which no small part of TF2 art is based? Mikado282 (talk) 07:26, 4 July 2014 (PDT) ; edited 12:02, 5 July 2014 (PDT)

How did they ignore this one? It's found on the label on the Scottish Handshake. DeGroot is the Demoman's last name, his full name being Tavish Finnegan DeGroot.

As noted, a number of "companies" reference the real or community names for game designers or industrial artists. There are a number of company names for which the reference is presently "unknown", and for which a suspicision may be held that the name is a reference to a game designer (e.g., Casali) or a historical graphic artist (e.g., Cornwell). I submit the following names as potentially references to persons for others to search for correlation to Valve or community developers so proper reference may be made:

When I try to edit the page it says the list itself is in a template; when I go to the template the list isn't there, either. The edit I'm trying to add is that the Clem's corn sign also appears in Borneo. -Captain Video (talk) 14:24, 13 July 2015 (PDT)

Is the Bonk Helm a product of Bonk!? It made from 2 Bonk! Atomic Punch but it also made (probably) from Batter's Helmet and we don't know if Bonk! is indeed the company who made the Bonk Helm or manufactured the hat. Yair03 (talk) 06:58, 22 April 2016 (PDT)

Cracky Pop may be a Coca-Cola reference

Coca-Cola contained a negligible amount of coca-leaf extract in its recipe until 1929. This makes sense considering Cracky Pop's name, i.e. "pop (soda) that contains crack," suggesting that, like Coca-Cola, it may be a cocaine-infused (or formerly cocaine-infused) soda in an alternate mid-20th century where Coca-Cola was much more transparently named. — The preceding unsigned comment was added by Tutwater (talk) • (contribs) 10:21, 9 August 2017