Carnival of Carnage is an official Special Delivery map. It released as part of the Scream Fortress 2014 update on October 29, 2014.

Similar in play to Doomsday, the objective is to carry a briefcase full of tickets to The World's Largest Strongmann Machine on the opposite side of the map and insert it into the spectral lock at the top, all while Merasmus makes snarky commentary — Merasmus is owner and host to this Evil Carnival, but is underwater to the Japanese Mafia (see Blood Money comic).

Similar to all past Halloween maps, there are pumpkin bombs and spells spawning on various locations on the map, although the spells appear as glowing crystal balls, with the respective color scheme of the normal and rare spells located on Helltower. Soul Gargoyles also appear on this map.

At the beginning of the round, Merasmus requests that player collect the tickets for entry to The World's Largest Strongmann Machine while simultaneously working to kill the other team in an attempt to appease the bloody desires of Bonzo, the evil Sumerian circus god. If a player plays the next round, Merasmus makes more comments at the player saying that they are stupid for falling for the trap, but he "promises" that he won't do it again.

Overview of the Duck Collectors part of the map. 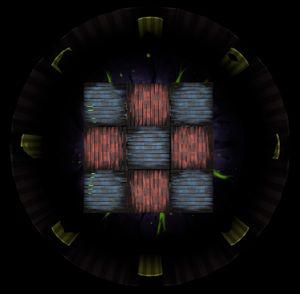 Overview of the Falling Platforms part of the map. 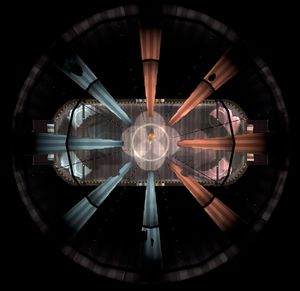 Overview of the Bumper Car Soccer part of the map.

During the initial battle for the briefcase of tickets, Merasmus may summon all players to The World's Largest Strongmann Machine and put one of three temporary Curses on all players.

Once either team has placed the tickets at the top of the machine, both teams are pulled into aggressive bumper car battles. The bumper cars are controlled with the directional and jump keys, with the option to activate a speed boost using alternate fire. Any player hit by another car receive damage and are knocked back, with both being affected by the speed of the attacking car. The more damage a car has, the farther it can be knocked back. If a player is knocked off the map, they become a ghost. Ghosts are capable of flight via the jump key, and can be turned back into bumper cars if they fly back to the arena and touch another player on their team. If a Ghost touches the opposing team's bumper car, the ghost will produce a sound and fly upwards, as if knocked back.

The bumper cars can also pick up one of four spells in crystal balls. These spells are:

Once in a Bumper Car Arena, the teams are pitted against each other in one of three possible randomly chosen competitions.

In "Falling Platforms", the last team with a player remaining on an increasingly smaller arena of intermittently falling platforms wins. If both teams have at least one player remaining on the last platform, or the center platform, the Horseless Headless Horsemann is summoned to knock players off of said platform until one team is left standing. If the Horseless Headless Horsemann is defeated before one team is left standing, another one is summoned again and again until the objective is achieved. There are no obtainable spells in this minigame.

In "Bumper Car Soccer", both teams try to ram a giant beach ball into their opponents' toothy goal. The first team to score three goals wins. Alternatively, a team can win by knocking the other team out of the arena. When one team is in match point, Merasmus announces to the players that he is bored and asks the leading team to hurry up and finish, although there is no time limit after he asks. If any player drives into a goal's up-chuck after a goal is scored into the scored goal, the player is pushed back in the opposite direction. Spells are obtainable in this minigame (see above for a listing of spells). If neither team has scored for a while, the game then goes into sudden death, where the first team to score a goal wins.

In "Duck Collectors", a large number of ducks intermittently spawn on a large figure 8-esque race track. The first team to collect 200 ducks wins. Alternatively, a team can win by knocking the other team off of the track. If damage is dealt to opposing players' bumper cars, golden "bonus" ducks will fly out of the rammed car and are valued as 2 ducks per golden duck. Spells are obtainable in this minigame.

If, instead of completing the objective of the minigame, one team instead simply knocks the other team off of the track, Merasmus will comment about the dishonorable win and what he thinks about it.