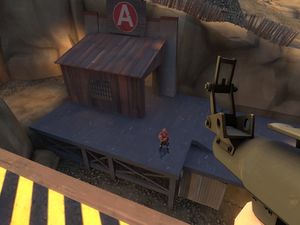 A Soldier overlooking an Engineer on Gravel Pit, C. 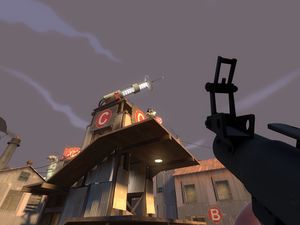 The main advantage for holding the high ground is the raised viewpoint that the player is granted, enabling them to more accurately judge where to fire projectiles to hit the enemy, and to maximize potential splash damage. On the high ground, the player's mobility is increased, and they are able to move to more effective positions quickly, such as jumping down from the high ground to attack an enemy. The player on lower ground will be disadvantaged against the player higher up because a number of weapons are less effective when firing uphill.

Also, when standing above your enemy, you can easily think about your ways to safely kill him, or can hide from his sight quickly before he notices you and reacts. This is mostly effective for Snipers (showing just your head to kill an enemy) and Spies, who can perform a stair stab or a leap stab.