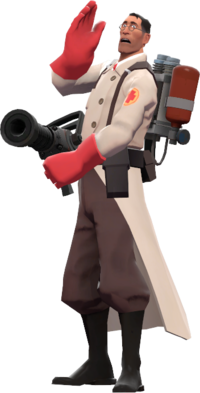 The voice commands are a communication feature that consists in pre-defined calls, usually used to quickly communicate with the team or call for help. When used, they are spoken in the voice of the player class, and may also include a hand gesture (not visible to players themselves). The voice commands are divided into three separate menus (default: Z, X, and C). Some - but not all - of the commands are also printed on-screen alongside typed messages.

Due to its importance and universal nature, the "Medic!" call by default has its own separate keybind (default: E). Teammates (and disguised Spies) calling for healing have a speech bubble with a red cross appear over their heads. When playing as a Medic, these bubbles are additionally visible through walls and have an on-screen indicator pointing to the player of origin when it is not in front of the Medic player.

There are calls that are context-sensitive:

Voice commands used by disguised Spies behave differently: to the Spy himself and to the enemy team, these commands sound as the disguised class; to teammates, the Spy sounds normal.

Voice commands can be called using the command voicemenu in the console. For more information, see Scripting.

Specific players can be muted in the PC version via the main menu by clicking the "Mute players" button near the bottom of the screen.

As of July 3, 2020 Patch, in order to use voice commands in Valve official servers, a player must have a premium account and a non-limited user account on Steam.