The Spy has the unique ability to disguise as other classes, both on his own team and the enemies. This, as well as his cloaking ability, helps him move unnoticed among the other players. While wearing a disguise, the Spy appears as the disguised class from the other team's perspective, and to the Spy's teammates, he appears as a friendly Spy wearing a mask representing his current disguise. 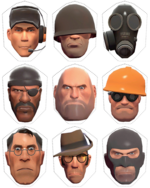 The masks that the disguised Spy wears as his teammates see him. The mask corresponds to the disguise.

On the console version, a disguise can be applied by opening the Disguise Kit, selecting the desired class to disguise as, and pressing confirm (default:

- Xbox 360). On the PC, a disguise is selected by pressing the number corresponding to the class the player wishes to disguise as. For example, a player could press the 5 key to disguise as an enemy Heavy.

By default, the player disguises as a member of the opposite team, but they may also choose to disguise as one of their teammates by pressing the 'toggle disguise team' key (default: - on PC,

Using the Disguise Kit is not instantaneous. After a disguise is selected, a Spy produces glowing particles of his team's color and a brief cloud of smoke for approximately two seconds (or half a second if switching between disguises), after which he stops emitting these particles and is fully disguised as the selected class and team. This can be avoided by being cloaked to any degree before selecting a disguise; once a disguise is selected, smoke particles begin forming which are not hidden by cloaking; however, selecting a disguise while already cloaked produces no smoke or team-colored particles. In either case, disguising creates a small amount of noise, which is somewhat dependent on which cloaking watch is used; these sounds can potentially give away the location of a Spy.

If the player has Your Eternal Reward equipped in their loadout, the Disguising costs a full cloak charge. It is not possible to disguise without a full charge or while cloaked (even if the Cloak Guage is being kept full by a nearby Dispenser). The Spy's only other means of Disguise requires him to perform a successful backstab on an enemy team member; non-backstab knife kills and kills with other weapons do not trigger this automatic disguise. Once successful, the enemy dies from the backstab, and the Spy immediately assumes a disguise identical to the enemy they just killed without any smoke cloud effect.

To cancel setting a disguise from the 'Disguise Menu' the default q is bound to 'lastinv'.

To drop a disguise (e.g. to capture a Control Point - Spy Limitations) there is no default key set, however one can be created by binding a key to change to a Spy of the same team/color.

When disguised as the enemy, Spies do not bleed from enemy fire nor do they receive knockback from any source except the Pyro's compression blast and the Scout's Force-A-Nature. Weapons with "On hit" effects such as the Blutsauger do not trigger when hitting, including hits that kill the Spy. However, Burning, Jarate, and Mad Milk affect disguised Spies as normal. Weapons that positively affect allies on hit such as the Crusader's Crossbow do not grant these to disguised enemy Spies and damage them as normal.

While disguised, a Spy can pick up Health kits to recover the 'health' of his disguise in addition to his actual health, if the player he disguised as was below full health at the time he disguised. This false health recovery still works, even if the Spy's actual health is full. Inversely, a Spy who is injured, but their disguise's health is full or Overhealed may still pick up a Health Kit. However, the cross icons that appears above him while healing are his actual team's color, not the color of his disguise.

If a Spy is disguised as an enemy, enemy Medics are capable of healing him with any of their medi guns. Both the Spy's real health and fake health are healed and overhealed as expected. Should a Spy become undisguised, the healing immediately breaks off. If a Medic decides to heal a disguised Spy, the "ammo loaded" count he sees is a random valid number based on the disguise's held weapon, from 1 to the weapon's maximum. Switching disguise weapons re-randomizes the value to the new weapon; as a result, switching back and forth results in an ever-changing count for weapons such as miniguns or flamethrowers, and is suspicious to attentive Medics. As with real allies, being disguised as a Medic or Spy displays "Übercharge: 0%" or "Disguised as X" instead of a loaded ammo count.

Buildings react to a Spy's disguise. Enemy Sentry Guns do not target Spies disguised as their Engineer's team, while Dispensers only provide resources to a Spy if his disguise matches its team. Teleporters work the same regardless of the Spy's disguise.

While a Spy is disguised as an opponent, he cannot capture control points or push Payload carts, nor can he block opponents from doing so. Conversely, a Spy disguised as a member of his own team can contribute to captures as normal (disguising as a friendly Scout or a Soldier or Demoman wielding the Pain Train only uses 1x capture rate).

There are several actions that can be taken that are specifically designed to make the disguise more convincing to enemy team members:

A Spy automatically loses his disguise if he is killed, steals the enemy's Intelligence, or if he attacks with any weapon apart from the Sapper. Alternatively, a Spy can manually remove his disguise by opening the Disguise Menu and selecting a Spy on his own team.

Disguises do not have matching hitboxes. This can be used to minimize risk of headshot. 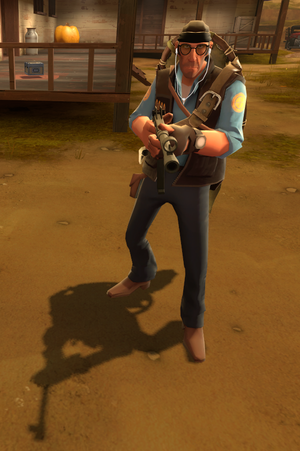 A Spy disguised as a Sniper equipped with an impossible loadout for a Sniper.

On the PC, the Disguise function can also be accessed directly through the Developer's Console using the 'disguise X Y' command with the following parameters: 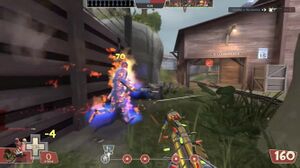 A BLU Spy holding a Powerjack while undisguised.