From Team Fortress Wiki
Jump to: navigation, search
For how to use Template:Quotation, see Help:Style guide/Quotes. 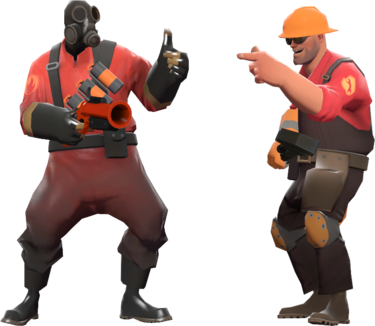 Responses are a feature similar to voice commands, where your character may deliver a line of speech when a response rule is met. The difference is that while a voice command can be initiated with the press of a button by the player, these speech lines only play in reaction to the player completing a specific task, such as taking Intelligence, killing several opponents in a row, destroying an Engineer's building, participating in a duel, or getting a Domination on a particular class. Even when these rules are met, some of the speech files play only very rarely. Some response rules are common to all classes, while others may be specific to that class.

The Administrator also possesses responses that play when certain conditions are met, some of which occur 100% of the time (such as "You've failed!" on a match loss).

The main script file is response_rules.txt. This file contains a description of the script language used by the responses, as well as definitions for most of the criteria used in the scripts. Additionally, there is one script file for each class. These files contain most of the class specific response rules and voice commands. Finally, tf.txt contains taunt rules for each class, as well as a few miscellaneous class-specific rules (such as rules to cause the Heavy to emote after firing his Minigun for a while).

The result of a scripted action is usually a scene. A scene defines what is said as well as the expression on the character's face when it is said. Scenes are defined in individual .vcd files, which can be found packaged in the .vtf, located in root\tf\scenes\player\.

There is one further level of abstraction between the response rule scripts and the actual sound spoken by the character. Scene files refer to a specific speech event, such as "Demoman.AutoCappedControlPoint03". These events, found in the tf2_misc_dir are defined in root\scripts\game_sounds_vo.txt and they refer to actual .wav files packaged in the .vpk (such as, for instance, demoman_autocappedcontrolpoint03.wav). The wave files are located in the tf2_sound_vo_english .vpk, under root\sound\vo and root\sound\vo\taunts.

In general, there is a direct mapping between the name of the scene (.vcd) file referred to in the response rules scripts and the name of the wave (.wav) file spoken by the character.