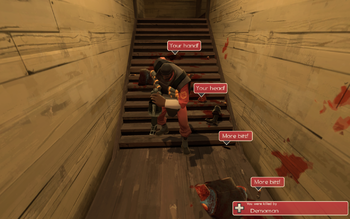 A Deathcam shot with gib labels.

The Deathcam, also known as the Freeze Cam, is a gameplay feature that activates upon death. When you are killed, the camera zooms in on your killer (in the case of assists, the one that dealt the fatal blow; if the killer was a Sentry Gun, the camera will focus on the sentry rather than the Engineer who built it) and freezes for several seconds. At this point, their name, health (if they die before the Deathcam engages, they'll be noted as "the late"), and whether or not they are your Nemesis (or have just gotten Revenge on you) are displayed. Their currently active weapon may also be displayed in its own tab, along with custom name and description. In addition to this, an 'On the bright side' box may be displayed, detailing how your stats measured up to your personal records in that round.

During the freeze frame sequence, you may wish to take a screenshot (F5 by default), which will be accompanied by a flash and the sound of a camera shutter. The screenshots are located in (folders prior to the Steam main folder) /Steam/steamapps/*steamname*/Team Fortress 2/tf/screenshots. This is a function built into Team Fortress 2 and separate from the Screenshot function built into the Steam client overlay (and usually bound to F12). With the addition of the Replay function, you may also be prompted to press the Replay key ([ by default) if you wish to keep a record of the life that just ended; this ability depends on the server supporting the feature (noted by a film icon in the server list).

If your ragdoll appears in the shot, it may be marked with a 'You!' label. If you were gibbed, your body parts are marked with humorous labels such as 'Your arm!', 'Your head!', 'Your lungs!', 'A bit of you!', 'More bits!', and so on.

The Console command hud_freezecamhide 1 hides the display of the "You have been killed by..." messages in the freeze shot. Setting the "Hide HUD during freezecam screenshots" option under Advanced Options hides both the "killed by" message and what remains of the HUD in the normal Killcam shot (See Gallery). Neither setting hides the killing players' Killstreak or Duckstreak indication.

According to the developer commentary, the function of the Deathcam in gameplay is to allow the player to discern the location of their killer and adapt their strategy upon respawn. This functions to lessen the frustration of being killed by an unseen or unexpected opponent and to turn the player's demise into a learning experience. Some achievements also require you to taunt immediately after killing them so that the camera shows you in a particular pose, while others require you to taunt over the body of the fallen opponent. However, the victim must be a live player. Deathcam achievements cannot be made against AI bots.