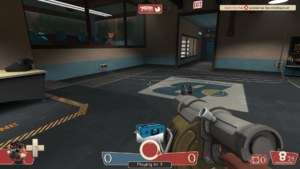 The player's HUD in CTF just after picking up BLU's Intelligence (playing as the Demoman).

Comparison between normal and minimal HUDs, (playing as the Scout) on a Payload map.

The Heads-up display, or HUD, is a system for quickly relaying important information to the user. It is a collection of various tabs surrounding the player's view in-game. A minimal version of the default HUD can be enabled in Advanced multiplayer options. The game also allows for the addition of HUD modification files (or "custom HUDs") to suit the player's taste.

Player's HUD death icon, seen briefly in place of the health number when the player dies.

on the PlayStation 3) or at the end of a round. It displays player information, server name, team scores, duel score (if you are running a duel), and so on. Information is given about each player including their Steam ID, what team they are on, how many points they have, and what class they are playing as (unless on the opposing team). 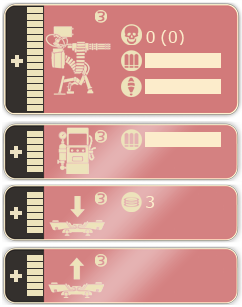 A player disguised as a Demoman with the Loose Cannon. 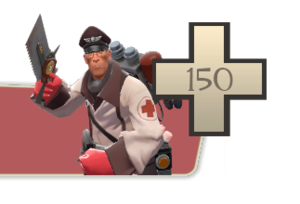 An example of a player's loadout being shown on the 3D Character HUD.

Team Fortress 2 allows players to modify their HUD from the default layout. Many community members have made modifications that are shared with the public. Reasons for using custom HUDs vary widely, but most agree that they are primarily to improve visibility of important information, e.g. health, ammo, Damage Text, or ÜberCharge meters, and move non-vital HUD panels aside. Most custom HUDs only modify the game visually and do not provide any added functionality to the game. Custom HUDs can also be used on servers with an sv_pure 1 setting.

Each custom HUD contains different files and their correct destination may vary (see their individual documentation for exact locations). However, custom HUD modifications generally only modify files in two folders:

After placing all files in their correct destinations, use hud_reloadscheme or restart the game and play with your new HUD.

Often after using hud_reloadscheme when replacing or copying files from /tf/resource the HUD will bug out and display fonts and other items incorrectly, requiring a restart.