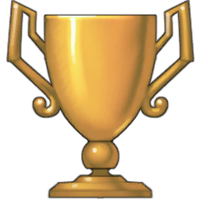 When a player completes an achievement, a trophy image briefly appears over their head. An applause sound plays as the accomplishment is announced to all players in the server through the TF2 chat, except a Cloaked or Disguised Spy. When a player obtains a certain amount of achievements in a Class set, they additionally unlock a Milestone achievement that rewards them with an untradable achievement weapon.

Achievements cannot be earned in servers with the sv_cheats cvar set to 1.

As a means of encouraging players to explore features of Team Fortress 2, achievements were supplemented by Contracts in the 2015 Gun Mettle Update.

Appears on the fifth day of the Sniper vs. Spy Update released on May 21, 2009 Patch. The achievement references the accidental leaking of the animated short Meet the Spy onto YouTube due to a bug with privacy settings.