on the PlayStation 3) or at the end of a match when Tournament Mode is enabled. It displays player information, server name, team scores, duel score (if the player is running a duel), and so on. Information is given about each player, such as what team they are on, how many points they have, and what class they are playing as. 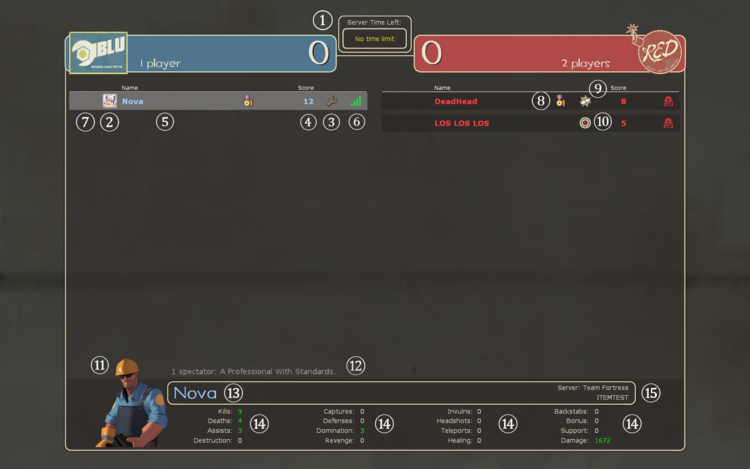 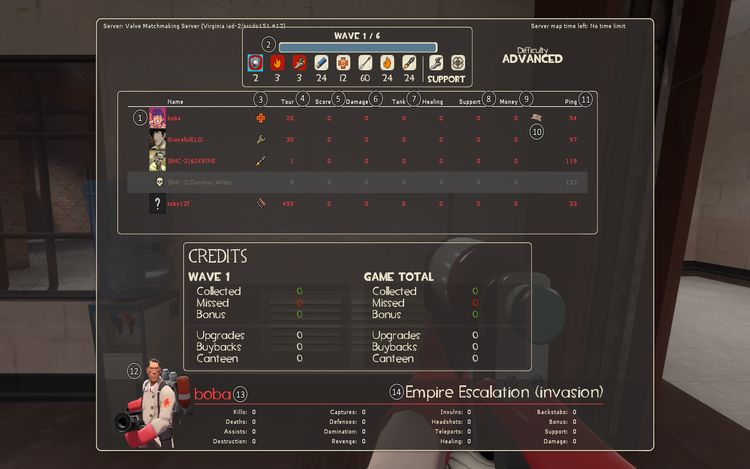 In Mann Vs. Machine, a different scoreboard appears with different information:

Points are the basic scoring unit in Team Fortress 2, and are awarded for different successful offensive and defensive actions. Performing these actions also often earns a voice response from the player's current class, and earning Bonus points displays a number on-screen in magenta if the option is enabled. The three players on the winning team that score the most points in a round are the MVPs for that round.

Points can be awarded in fractions; for example, a kill assist is worth ½ a point. However, fractions of points are rounded down when displayed on the scoreboard; having a single ½-point does not affect a player's score at all, and a player must complete two ½-point actions to have their score increase by 1. Points are also rounded down before the subscores from each category are added together, so having two ½-points in two different categories is not displayed as 1 point, instead both being rounded down to 0 and added together afterwards. As a result, having an odd number of ½-points in several categories will cause a player's score to show as lower than expected.

Note: Support points do not count toward the player's overall score.

Note that one action may result in being awarded points for two or more reasons; for example, earning a headshot with the Huntsman awards points for the kill, headshot, and bonus points for the specialized kill.

1True for the majority of maps. Certain maps can have differing time requirements; for example, Upward requires 50 seconds of cart pushing for one capture point.
2Damage calculated is not affected by crits or fall-off.
3The Heavy's Primary Weapons have a 75% damage reduction against Tanks which is not included in this. Thus, the Medic gains support points equal to 2x base damage = 8x actual damage done.

In Advanced settings, players can change the appearance of their scoreboards with alternate class icons and ping showing as values.

Enable mouse input on the scoreboard

Having this setting enabled allows the player to use their mouse when the scoreboard is active. Left-clicking on teammates shows their stats, while right-clicking allows easy trading, muting, and visiting their profile. It is also possible to enter tf_scoreboard_mouse_mode 2 in the console command to enable a scoreboard view that only enables the mouse cursor after clicking the screen. Note that, due to a bug, this currently does not work in Spectator view.

Display ping values as text on the scoreboard

Having this setting enabled shows the ping of players as numbers instead of the yellow, red, and green bars.

Enabling this setting swaps the default class icons with more realistic versions. The Alternate class icons are properly shaded and have a yellow circle behind them, presumably for better contrast.