From Team Fortress Wiki
Jump to: navigation, search
For a full, more detailed list of all maps, please see List of maps (Classic). 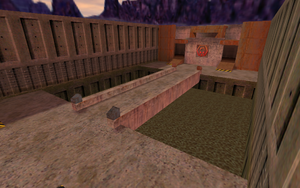 The bridge area in the center of 2Fort (Classic). 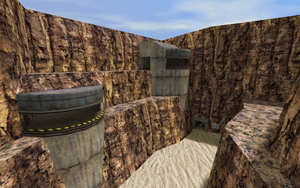 The crevice looking over the blue base of Badlands (Classic).

On Standard Capture the Flag maps, both team's flags are typically located deep within their territory, usually in a symmetrical location from each other, in an area known as the "Flag Room". To pick up the flag, the player must simply walk over the flag. While holding the enemy's flag, typically, the player must bring it to the location of their "capture zone" where they then must step onto a platform, usually indicated by the team's logo, in order to successfully capture it. After each successful capture, your team will be rewarded with ten points and the individual player will usually receive full health, ammo, and/or some grenades.

If the flag carrier is killed or the flag is intentionally thrown/dropped, the flag will remain stationary for approximately 20 to 60 seconds, depending on the map. During that time, the flag can be picked up as normal. Each time the flag is dropped, the timer is reset. The enemy cannot move or reset the flag themselves. If a Spy acquires the flag while disguised, he will lose his disguise and can no longer change his disguise or feign death. 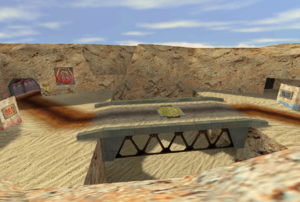 Control points are platforms with a team logo and/or team-colored flag in the center. Neutral points will have no flag and/or a yellow circle in the place of team logo, and depending on map, have a yellow circle. The capturing of a control point is dependent on the map. On some maps, such as Warpath, the player simply needs to touch the control point. On Warpath, after a point is captured, it cannot be captured by another team for another 15 seconds. However, on Canalzone 2, a player must take a flag to the command point. A player may still capture a control point while the point is being occupied by enemies on either of these maps.

There are three states for a capture point:

Standard Control Point maps play symmetrically. Both teams start within their own base. Some maps allocate a team a single capture point and several neutral capture points in the center, while others maps have all points neutral. The team that captures all control points wins. 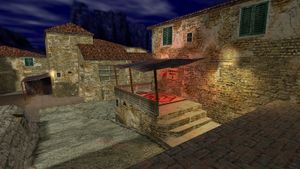 Attack/Defend maps can come in various styles. Dustbowl requires the Blue team to capture a single control point on three separate stages to win the game. This is done by carrying a team flag to the capture point. If the attacking team fails to win any stage, the map is over. Other maps such as Avanti require the attackers to capture four control points, in order, within a single stage. This is also done by advancing a team flag. Once the attacking team wins, the teams are then switched to allow the defending team to attempt to retake the four control points.

Assassination/Escort maps feature a three team style gameplay. The first team is typically the VIP. The second team is a series of Bodyguards that protect the VIP. The third team are the Assassins who attempt to eliminate the VIP. Scoring is based on if the Assassins eliminate the VIP or if the VIP escapes. Currently, Hunted is the only official map released under this game mode. The VIP is the rarely used Civilian class. Bodyguards consist of Soldiers, Heavy Weapons Guys, and Medics. Assassins consist of Snipers.

In addition to the official game modes released by Valve, Community-made maps can create new modes of play. For example, Murderball features a King of the Hill style game featuring a common ball in which points are tabulated by keeping the ball for as long as possible while the three other teams try to take it from you.