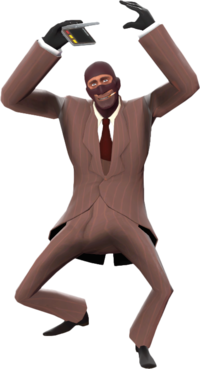 Crabmod is a community-created game mode that elaborates upon the Spycrab meme. The BLU team takes on the role of a migrating herd of "Spycrabs", while the RED team consists of Huntsman-wielding Snipers called "Hunters" attacking the "Spycrabs".

The goal is for the Spycrabs to reach the other side of the map before the Hunters can eliminate them. The game begins with only 2-3 Hunters, with the number increasing depending on how many players are present. The game is over when one of two things happen:

The players playing as Spycrabs cannot switch their weapon from a Disguise Kit unless the Spycrabs are victorious. When the Spycrabs are still alive during the round, they must keep their Disguise Kits above their head and crouch while walking to the control point. Some server mods make it impossible to move with the Disguise Kit below your head.

On some servers, if a Hunter has killed a fair amount of Spycrabs they are awarded a fake achievement called "Crazed Huntsman" which will protect them from friendly fire during the end of the round.

The Spies are forced into the Spycrab position. If they do not crouch, they are frozen in their spawn area until they do so. A message stating 'Crouch and Look Up' will appear on-screen to help new players learn what to do. If they look down, the camera auto-locks them back to looking at the sky, but the angle is sufficiently low enough to see the Hunters. Fallen Spycrabs will respawn as Hunters.

Note: If a Sniper does not own the Huntsman or Jarate, they will be given a modified Pistol that fires arrows. This Pistol uses the Engineer's viewmodel, but the player appears to hold nothing in third-person view. If the Sniper owns Jarate, but not the Huntsman, they will only be able to use Jarate.