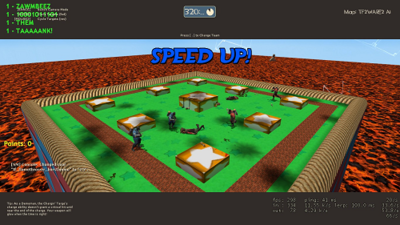 TF2Ware is a custom SourceMod game mode and accompanying map that emulates the gameplay style of the WarioWare game series on Nintendo consoles. The modification was created by Mecha the Slag, who is also known for various other MechaWare projects. Two years after Mecha abandoned the project, TonyBaretta fixed the code and created a new version with over 50 games.

The gameplay within the map involves all players participating in randomly chosen "microgames", simple tasks with short instructions and a duration of less than 5 seconds. Players are automatically changed to the class the microgame (or their role within the microgame) requires, are generally forced to wield a specific weapon (or whatever was currently in the required slot), and do not have any ammunition or cannot melee attack unless the microgame requires it. Players earn one point per microgame that they "win", and as soon as a number of microgames are played, a Boss Stage begins, which is longer (about one minute on average) and slightly more complex than normal microgames, and always has a dedicated environment within the map. The player with the most points following a Boss Stage is given free rein to kill all other players on the stage, after which the flow of gameplay is looped and everybody's score reset to 0.

The most current version of the map is TF2Ware2_a4.

The underlying code of the plugin was altered at one point when Valve changed a command's usage, forcing the server to be less secure in order to run the mod properly - the server would be exposed to hostile takeovers. The new version of TF2Ware has since fixed this bug.

Any player who meets the win conditions of a Boss stage is awarded five points instead of one.

Special rounds are activated when the words 'SPECIAL MODE!' appear across the screen. These real special rounds include:

Rounds that are not real; these are fake rounds that were added in April 1st, 2016.

About once every ten games, the game will send all players to a waiting area above the map. In this mode, all players have 3 lives and 3 players are chosen at random to play normal microgames. Winning the microgame first will keep your lives intact while the others playing the microgame will die and lose a life. Once your life count reaches 0, you are eliminated from play until the next round of microgames starts. After a certain amount of eliminations, the number of players per microgame will go down to 2. This mode will continue until two players are left, at which point the boss microgame starts and the loser will lose a life if they fail. If both players are left standing, another boss microgame will begin. Committing suicide outside of microgames will not count as a lost life.