Fortress Blast is an open-source SourceMod plugin for Team Fortress 2. It can be run on top of any game mode and may be combined with other plugins. The main draw of the plugin is that it allows a server to add custom powerups to any map. Also included in Fortress Blast is an optional mini game mode called Gift Hunt that adds an extra condition to existing map game modes.

The plugin was created by Naleksuh and Jack5, and was first released on the 26th of October, 2019. Version 1.0 was released later on the 10th of November. Nine days later, Fortress Blast was first popularised by prominent YouTuber MediExcalibur2012.

From the 6th of April, 2020, Fortress Blast underwent an extended hiatus that lasted until the 23rd of March, 2021.

The powerups in Fortress Blast are heavily inspired by the mechanics in the Marble Blast series of games, and even use sound effects from said games, specifically the titles Marble Blast Gold and PlatinumQuest. Version 0.1 of the plugin released with all storable powerups from Marble Blast Gold, yet the Time Travel powerup was adjusted to work inside a multiplayer first-person shooter.

Powerups spawn in fixed locations around a map, defined by the server. These locations may be duplicated across the middle of a map in cases where the map is symmetrical. Fortress Blast comes with powerup locations for several official maps and many more custom maps. It also includes a feature where players can drop powerups on death. 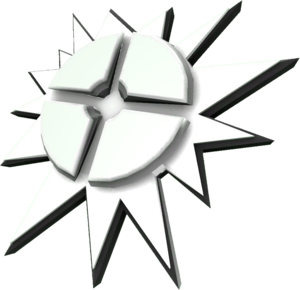 The powerup model made by ChargingTurnip used by Fortress Blast. All powerups use this model but differ in color.

The powerups in Fortress Blast are similar in appearance to those in Mannpower. In fact, they replace the powerups from that game mode by default. However, they differ from Mannpower in the following ways:

What follows is a list of powerups in Fortress Blast as of version 5.0:

Gift Hunt is a map-based game mode exclusive to Fortress Blast, inspired by Gem Hunt and Gem Collection from PlatinumQuest. It was introduced in version 2.0 of the plugin, but was overhauled in version 3.0 to be compatible with symmetric stock maps, and again in version 4.0 to add Attack/Defend and Payload support among other map game modes.

In Gift Hunt, small gifts appear randomly around a map. The mission of each team is to collect a certain number of gifts, which unlocks the objectives on the map that can win them the round upon capture. Above gifts are sprites that can be seen through some walls, allowing gifts to be found quicker. The number of gifts required to unlock the objective can vary between servers and player counts. If all the gifts on the map have been collected, more will appear.

If the server has specified that RED team's role on a certain map is to defend, gifts do not spawn until setup time is over and the round timer starts paused. If the BLU team collects the required number of gifts, the objective will unlock as normal, but if the RED team does so, the round timer will start ticking down.