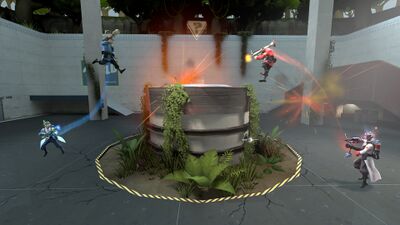 Ultiduo is a competitive game mode intended for competition and training. It features two player combos, Soldier and Medic pairs, battling over a King of the Hill point. As opposed to 6vs6 or Highlander, Ultiduo focuses more on strong coordination between the two players, since neither has a very good chance of surviving without the other. This gamemode is played on small KOTH maps that are specifically made for it. Ultiduo is often played by the 6v6 combo, containing the Medic and Pocket Soldier, to build up synergy between each other.

Ultiduo features a small map with a single control point in the King of the Hill style, with 5 minutes needed to win. The two teams are limited to one Soldier and one Medic, with almost all unlocks being banned. The gameplay consists of the two combos vying for positioning and Über advantage, and emphasizes deathmatch skill, healing and ammo management, and strong teamwork. Because these topics are crucial in competitive play, this game mode has gained popularity as a practice form for the Pocket and Medic of 6vs6 teams.

There are two main Ultiduo maps, both of which feature strong high ground and low ground differences, along with little to no health or ammo packs.

ETF2L has a whitelist for Ultiduo allowing the default loadout for both Medic and Soldier with few unlocks for both.
Naturally reskins of stock weapons (e.g. strange weapons, festive weapons, botkiller weapons, the Frying Pan, Conscientious Objector, ...) are allowed.

The Disciplinary Action
The Escape Plan
The Original

The Blutsauger
The Overdose
The Ubersaw
The Crusader's Crossbow


In general, the loadouts are designed to be as limited as possible due to the focus on deathmatching skill with the core classes.

Ultiduo tournaments are often held by leagues or sponsored by community members. As each team requires only 2 players these cups are usually easy to set-up, making it a viable option for offseason competition.

Ultiduo is often used by players as a source of practice for Soldier and Medic deathmatching, and consistently sees play through small scale tournaments, usually for fun. It sees almost no league play and isn't played by most players as their main competitive mode. Due to the small player count, many players participate fairly regularly.

Ultiduo hails from a similar competition from TF2's predecessor, Team Fortress Classic, called Ultimate Soldier (made by ozfortress). This pitted two soldiers against each other in a 1v1. Shotgun was often more powerful back in these days, as the spread of it was much smaller, allowing you to 'snipe' your enemy. This was often frowned upon, but typically the only way some players with poorer internet connections could compete.

The original ultiduo maps were not koth, and victories were awarded based on who scored the most frags. The gameplay has evolved over the years, especially with unlocks and the increase in player skill.