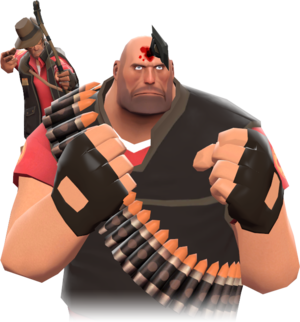 Friendly fire is used to describe a situation in which a player can damage or even kill a teammate.

The ability to inflict friendly damage was originally an option available to servers during the Team Fortress 2 beta. Overall, this made setting up an ÜberCharge quicker and assisted Spies, as it discouraged Spy checking. Valve removed the feature upon release as it was known to cause errors within the game's code and harbor potential for griefing. The low focus on accurate shooting also meant that friendly fire could become an impediment if several classes attempted to cooperate with one another.

Full friendly fire is still available as a server option, but is rarely used in standard play. Because the feature has remained relatively unchanged since the beta, there are several unexpected situations that are covered below. Killing an ally will reduce the player's Kill statistic (and will go into negative numbers), but still reward a scoreboard point.

On some servers friendly fire is temporarily enabled for various reasons, such as while waiting for enough players to join, after the round ends, and during Stalemates.

A Heavy killing a Scout on his team with friendly fire enabled.

A Medic getting an assist for healing an enemy Spy that backstabbed a Sniper from his own team.