Team Fortress 2 Classic is a re-imagining of the 2008 era of the original Team Fortress 2, adding in old features that were scrapped and working upon them or adding new content such as weapons and game modes.

This Source mod runs on Source SDK 2013 Base Multiplayer - the first Facepunch thread was created on January 9th, 2015.

Development was started in December of 2014 by danielmm8888, with the initial code upload in January of 2015.

The first version's release date was to be sometime earlier in December 2014, however, there is a fuzzy line between the 2014 release date of TF2 1.0.0.9 and that of Team Fortress 2 Classic.

The current Project Lead is 'Drudlyclean the Skeledude' as of May 13th, 2018.

Day 1[1] officially introduces the VIP gamemode, along with the Civilian class. With it, three new VIP maps were also introduced.

Day 3[3] introduces the Domination gamemode and the four-team mode, with new 3 maps.

Day 4[4] introduces a VIP version of Badwater with minor differences, 6 returning weapons, and 15 brand new achievements. It also introduces 3 new medals for those who had roles in TF2C, and improved bots. These changes are all accompanied by the patch notes, which list all of these changes in detail.

While the mod already has every game mode from Capture the Flag up to Special Delivery, the mod also adds new game modes.

Based off of VIP from Team Fortress Classic, the BLU team needs to escort their Civilian to the end of the map, while RED needs to eliminate him to win. The Civilian is randomly chosen at the beginning of each round, but a player can also be voted to become the Civilian. There is also a VIP race gamemode, however, there are not yet any official maps for this gamemode.

Domination is a game mode where each team tries to capture Control Points in order to gain points. Each captured Control Point gives their team "points" every few seconds. The more Control Points a team has captured, the more points they gain, and the first team to hit the point limit wins. 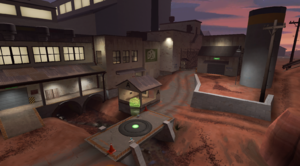 Four Team is a sub-game mode where four teams fight over objectives instead of the traditional two. This sub-game mode introduces two new teams to the already existing RED and BLU, YLW (Yard Logistics Workers), and GRN (Global Radio Network).

Four Team supports any existing game modes, as long as it is logically symmetrical.

Overpowered is a game mode in a similar fashion to popular community game modes, such as Vs. Saxton Hale and Freak Fortress 2, where one player, selected at random, takes the role of the Henchman, a class that has a large health pool and damage output, at the cost of only being able to use melee weapons. All other players, which are put on the RED team, will be given a brief amount of time to build up their defenses until the Henchman is released. The Henchman wins the round if he kills all enemies, otherwise, the RED team wins either by killing the Henchman or capturing the Control Point.

Aside from the nine classes from the main Team Fortress 2, Team Fortress 2 Classic adds new game mode-specific classes into the game. These classes can only be played on their specific game modes. These include:

Based off of the Civilian in Team Fortress Classic, the Civilian is used for VIP mode. Armed only with an Umbrella, the Civilian must be escorted by their team to the end of the map. The Civilian has a permanent 5x capture rate, and he can grant a teammate 10 seconds of mini-crits with a 20 second cooldown. He is voiced by Benjamin "Benjamoose" Rudman[5].

Civilian in the four different teams

The Henchman is a monstrous class used for the Overpowered game mode. He will spawn with an extremely large health pool, which scales with the number of players in the server, and the ability to Charge at enemies. When the Henchman receives damage, his damage output increases, up to a maximum of +210%. He can only use melee weapons.