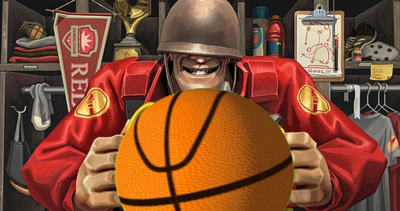 Basketball, or Bball, is a gameplay modification for Team Fortress 2 played on maps that have been purposely created or altered for the game mode. The mod focuses on allowing individuals to practice their rocket jumping and air shooting skills.

In Basketball, everyone plays as the Soldier; although depending on the region, the Demoman may be allowed. The map looks like a standard basketball court with two baskets on either end and fencing surrounding the court. The game is played like a typical Capture the Flag game, however, there is only one neutral Intelligence briefcase and the capture points are the basketball hoops. Since you cannot jump into the hoops, players must rocket jump in order to score. The team with the most captures wins the game.

One important aspect of Basketball is the use of server mods. Both Sourcemod and Metamod are essential as the game features instant respawn and lacks a Deathcam. Servers often run a specific Basketball configuration in order to limit the teams to playing as just the Soldier, as well as setting time limits and using other features like Tournament Mode.

The design of Basketball maps can differ greatly in theme, but they are all generally the same. The biggest difference from map to map is the surrounding area in which the basketball court is located. Accepted Basketball maps include ctf_bball and ctf_ballin, although others exist.

There has only been one notable Basketball tournament. It was sponsored by Novint using Frag Fest Servers and offered the Novint Falcon as the grand prize. 69 players signed up to play in the tournament which was eventually won by the team called "Beauty and the Beast" consisting of team members Wonderland and Beef.