From Team Fortress Wiki
Jump to: navigation, search
This article is about the custom game mode. For other uses, please see Zombie (Disambiguation).

A Zombie Survival logo, used in some maps for the game mode between 2017 and early 2018.

Zombie Survival is an unofficial game mode for Team Fortress 2 (not to be confused with Zombie Fortress or Zombie Escape). It is also referred to as "Medic VS Engineer". The game mode has no officially recognized SourceMod plugin, requiring server owners to create and balance the game mode to their own liking. There are two opposing teams: the Survivors (RED Engineers) and the Zombies (BLU Medics). BLU's goal is to kill all the Survivors. RED's objective is for at least one Survivor to be alive after (usually) 7 minutes of gameplay. If all Survivors die before the end of the round, the Zombies win; otherwise, the Survivors win. When a Survivor is killed, they are immediately switched to the Zombie team, while killed Zombies simply respawn. It is unknown who created Zombie Survival.

In Zombie Survival, Survivors lack the ability to build Sentry Guns, and Zombies are restricted to melee only; however, both teams have access to global perks to help balance the classes. Zombies gain the most perks, including increased jump height or double jump and increased speed during the last 2 minutes (on some servers). Survivors remain mostly vanilla, unless there are very few alive, upon which these Engineers gain a permanent Buff Banner effect (and sometimes other helpful effects). Random critical hits are disabled in Zombie Survival.

During setup time, the Survivors are given the opportunity to safely build Dispensers and Teleporters as barricades, methods of escape or tools for killing (in the case of Teleporters) in an area they wish to fortify without the presence of the Zombies. The Zombies are frozen within their spawn (within which they are ÜberCharged) until setup time is over. Survivors can continue to build outside of setup time, though the horde of Zombies can make building difficult and dangerous.

Bonus rounds may happen on the last round of a map. Each bonus can have varying effects on Survivors, Zombies or both. Below are examples of bonuses that keep both teams' classes the same. There are some bonuses where classes are changed per team, but these are not common.

Juggernauts are an optional feature for Zombie Survival, much like bonus rounds. They are Zombies that are tinted green, and only two Medics are selected to have this power. If one disconnects, another will replace them. Juggernauts can't do much on their own, merely having a small speed boost and health regeneration increase. However, non-Juggernauts can inherit the health regeneration increase so long as they are within the Juggernaut's range. This makes Juggernauts the perfect tool for leading Zombie rushes. 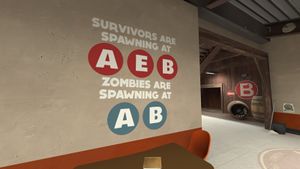 A picture of randomized spawning logic in the Zombie Survival version of Steel.

Some maps built specifically for use on certain Zombie Survival servers. These maps need the help of server game mode logic in order to run properly, and range from optimisations of existing Valve or community maps (buffing or nerfing of defensible spots, moving of health and ammo packs, etc.) to completely new experiences. Many of these maps are subject to heavy rebalancing to ensure they remain suitable for the game mode.

On the maps that stay close to standard gameplay, a secret area or function is usually placed within them to peak player interest, and in the case of optimisations, unreachable areas may be opened up. Some maps, on the other hand, are radically different from the base game, serving as either a concept testing ground or an isolated experience incompatible with the base game mode.

Telefragging is a method of quickly eliminating Zombies, and is most effective in narrow areas where Medics must step on a Teleporter exit in order to reach a Dispenser barricade. In order for a proper telefrag to be set up, a Teleporter exit is placed directly in front of a Dispenser, and the associated Teleporter entrance is placed within a non-intrusive and close-by area (but not directly behind the Dispenser, as this prevents Engineers from using it as cover). In less narrow areas, Medics can easily destroy telefrags by crouching some distance away from the Teleporter exit and attacking it directly. Engineers using the telefrag also open themselves to being killed by the Spinal Tap taunt or suffering a regular death (most prominently for the Engineer that built the Dispenser, since they cannot walk through it). 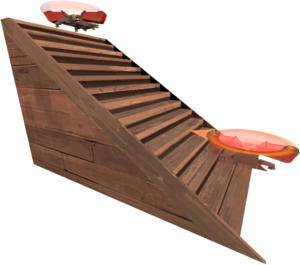 "Stair-trapping" is a usage of Teleporters prominently used in Zombie Survival and can be performed on most sloped surfaces. By placing a teleporter at the bottom or top of a slope, as close to the middle of the slope as allowed, the increment from the floor up to the teleporter may be so great that a jump is required. Stair-trapping is useful for temporarily denying Zombies access to a defense at the top of a slope. A stair-trap can also be part of a telefrag.

"Boosting" is a strategy where a Survivor, while standing on a Dispenser or elevated geometry, jumps and places a teleporter exit on a otherwise unreachable surface. This allows all nearby Survivors to teleport to the newly placed exit, causing the Zombies to expend more time trying to reach them. Boosting is also used to describe the act of an Engineer being hit upward into an unreachable area by a Medic (a.k.a. Medic-boosting). However, due to the effectiveness of Medic-boosting and how it can assure an Engineer's victory on maps that haven't been patched to prevent this, servers tend to have rules banning this type of boosting.

"Rushing" is a term used to describe the grouping up and simultaneous attacking of Zombies, in order to completely overthrow an otherwise impenetrable Survivor defense. The leader of a rush is usually the person that requests one, unless Engineers get too close to the group and participating Medics are forced to intervene on their own. It is important to have a microphone for voice chat or know how to effectively use team chat in order to command a rush, since players of Zombie Survival often do not listen to calls for Medic.

"Amping" is an abbreviation for performing the Medicating Melody taunt with the Amputator during a Zombie rush. This increases the health regeneration rate of surrounding Zombies and decreasing an Engineer's chance of survival. Medics using the taunt are referred to as "Amps" by Survivors, and are considered a high priority to kill due to their immense power. In order to avoid being singled out, these Medics often shield themselves behind walls, other obstacles and sometimes their own teammates. Additionally, the Amputator's healing power stacks with other Amputators, so multiple Amputator-wielding Medics can help keep each other alive.

Taunt killing is possible as a Medic with the Spinal Tap taunt using the Ubersaw (and as an Engineer with the Frontier Justice's Dischord and Gunslinger's Organ Grinder). Zombies can use their killing taunt most effectively during a rush. The strategy involves taunting outside of the vicinity of a Survivor base in an attempt to kill them through their buildings, most common in situations where Zombies are unable to push past Survivor defenses. This strategy rarely works and is easily countered by knockback, but there is a high chance that the Engineer killed will be the owner of the front-most building, resulting in its destruction.

"Prop Glitching" is hiding inside a prop which are usually barrels, which can be found near the first point in the control point map called Steel. This can be done by holding w and using a low damage weapon (melee weapons usually destroy the barrel in one hit). When the barrel is moving, it does not have collision, which allows for the Engineer to walk inside and hide in the barrel. Keep in mind that weapons can stick out when looking at certain angles.

"Short Circuting" is the act of using the Short Circuit's alt fire within close proximity to a Medic. This causes both the Medic and the Engineer to take damage, but the Engineer can use this damage to boost up to certain locations which are impossible to get on. This strategy is useful when you have no people to help manually jump boost upward, and you can use this to bait new players to try and melee you, which allows for a quick damage boost up in otherwise normally unreachable places. Spots like these include, but not limited to, the second blu spawn in the control point map Gorge, the spot above the entrance to the middle point in Sawmill, the island outside the map in Suijin, the roofs in the middle point in Suijin, and the metal bars inside the Intelligence room in Well.

"Pixel Walking" is the act of glitching inside a wall and standing on a small ledge, like the ledge near the blu spawn in Badwater Basin, or the speakers in Well. This is a good strategy as you can get on a glitched ledge to jump onto another ledge that is unreachable to medics. Even if the Medic gets on the ledge, they can easily fall off when pushed by damage or one of their own teammates.

"Bunnyhopping" is the act of hopping and air strafing repeatedly to gain momentum and slightly higher speeds. This can be used by the zombies to get onto one of the Dispenser boost spots in Harvest.

"Noclip spots" are spots with broken geometry which allows for players to hide inside the geometry without being seen. Spots include the tires under the stairs in the koth map Sawmill (note that the tires in the ctf map do have collision), and the rock formation near the waterfall in Sawmill.