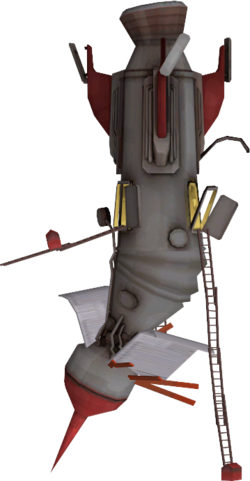 Grordbort's rockets (also known as Grockets) are crash-landed rockets, bent to one side, with smoke and flames billowing out. They appeared in the game for a number of months in the year 2011. Their appearance was part of an ARG promoting the release into Team Fortress 2 of particular interdimensional cosmetics and space guns developed by Weta Workshop in collaboration with Valve. Depictions of the rockets, their storyline, and their contents were also represented in Comics and other media published by Valve and Weta Workshop. Both the appearance of the rockets in the game and changes to their appearance proceeded the dates of the release of Content packs of Dr. Grordbort's items.

July 18, 2011 Patch
On July 18, black smoke could be seen rising from behind distant buildings and hills in the skylines of 2Fort, Badwater Basin, and Barnblitz. Spectators could explore and observe wrecked spacecraft.

July 20, 2011 Patch (Dr. Grordbort's Victory Pack Update)
Two days later, the Dr. Grordbort's Victory Pack was released for the Soldier (Cow Mangler 5000, Righteous Bison, Lord Cockswain's Pith Helmet, and Lord Cockswain's Novelty Mutton Chops and Pipe). The comic released with the Patch, Grordbort's Crash, explained that the RED Soldier had found weapons, including the Righteous Bison, in a crash-landed rocket similar to those seen on the maps. The Official Blog explained that the Weta Workshop had developed "some nifty-looking guns" for the game; the art of the post showing the Soldier with items from the pack and also showing the rocket that had crashed into the barn on 2Fort.[1]