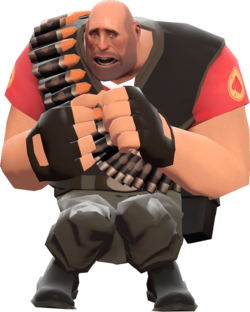 Damage is any event that reduces the health of a player or entity. Damage can come from a variety of sources, such as bullets, explosions, fire, falling from a great height, bleeding, certain taunts, or various environmental hazards (such as being struck by a train, drowning in water, or being sliced by a saw blade).

Damage dealt by weapons is calculated with the following formula:

Damage dealt by critical hits uses the following formula instead:

Damage dealt by mini-crits uses the following formula instead:

A weapon's base damage is a fixed value used as a starting point for damage calculations.

Certain weapons can have situational changes to their base damage:

The splash modifier is a number used for explosive weapons that do not connect directly with the target. Typically, an explosion deals its full damage at its center and half as much damage at the edge of the explosion's radius.

For the sake of consistency, weapons that explode when they hit a player directly ignore any falloff from splash damage when calculating damage to the struck player.

A player may have resistance or vulnerability to damage due to certain items. Most sources of damage resistance only apply to a certain "type" of damage. The following is a list of all damage types used in the game:

Some weapons can deal more than one damage type at once; for instance, the Cow Mangler 5000's charged shot deals both explosive damage (from the explosion itself) and fire damage (from the afterburn it inflicts).

Multiple sources of damage resistance stack multiplicatively; for example, a Soldier with the Pain Train (10% bullet damage vulnerability) and an active Battalion's Backup (50% resistance to damage inflicted by Sentry Guns) has an overall damage resistance of 45% against bullets fired by a Sentry Gun, as opposed to the 40% that would result from the percentages simply being added together.

Most explosive weapons deal less damage to the user than to enemies, depending on the situation. See the individual weapon pages for more information. 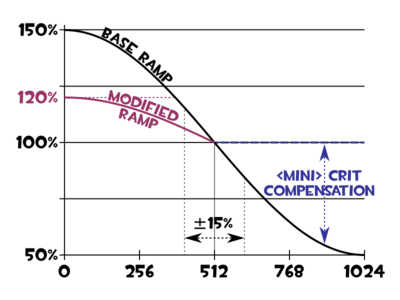 How damage is affected by distance.

Flamethrowers ignore the regular distance modifier calculations entirely, and instead use their own separately calculated modifier based on projectile lifetime.

All weapons use a distance modifier of 1 for attacks against buildings; as a result, buildings always take the same damage from attacks, regardless of the distance between the building and the attacker.

On servers with the server cvar "tf_damage_disablespread" set to 0, the distance modifier for each attack is randomly adjusted by ±102.4 Hammer units (shown in the graph around 512 units, as an example). This results in a 15% variance in damage, including with weapons that are normally unaffected by distance (such as melee weapons).

On servers with the server cvar "tf_damage_disablespread" set to 1 (the default value used on official servers), the effective distance used for damage calculation is the distance that is 102.4 Hammer units less than the farthest possible random distance. This means that being farther than 921.6 units away is treated as being 921.6 units away; the normal maximum distance is 1024, and 102.4 less than that is 921.6 units.

Critical hits and mini-crits have two effects each.

A critical hit deals 3 times the base damage, while a mini-crit deals 1.35 times the damage following falloff compensation.

Both critical hits and mini-crits check to see if the final distance is greater than 512 units: if it is, then any damage lost is offset by an equal increase in damage. The end result is that the weapon does not lose damage due to the distance modifier when the player is more than 512 units away; if the attack were not a crit or mini-crit, the damage would continue to decrease out to 1024 units.

The extra damage added on by critical hits and mini-crits - including that from ramp-up or offsetting falloff - is of the "critical" type instead of the weapon's standard type (e.g. bullet or explosive). This affects the calculation of damage resistances.

While active, the Battalion's Backup protects team members from critical hits and mini-crits, treating them as normal damage instead. The Vaccinator's protective shield blocks 100% of critical damage from attacks of the selected type.