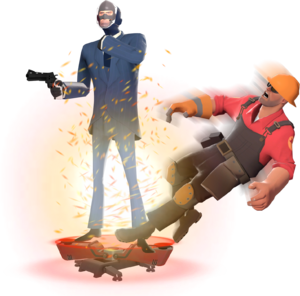 A telefrag is a type of death that occurs if a player is too close to a Teleporter exit as an enemy player uses it. Any players that occupy the same space as the teleporting enemy are instantly killed and the teleport completes successfully. Multiple players can be telefragged at once if they are all inside the teleporting player's bounding box.

Telefrags deal 1000 damage and are indicated with the "unspecified death" skull and crossbones icon, with the person teleporting being credited with the damage and the kill; since telefrags are relatively rare and there are almost no signs as to one having taken place, many of them go unnoticed by bystanders (although bilaterally-unexpected telefrags are likely to be humorously noted).

There are only three known ways for a telefrag to occur:

It is not possible to telefrag allies even when friendly fire is enabled. Players can be telefragged even if they are ÜberCharged, under the effects of Bonk! Atomic Punch, wielding the Dead Ringer, or under any other damage-reducing effect.

A particularly devious Spy strategy involves sapping an Engineer's teleporter entrance and then standing on it. If the Engineer is careless and is standing too close to the exit while removing the Sapper, the Spy will instantly teleport the moment the Sapper is removed, telefragging the Engineer and allowing the Spy to sap the Engineer's remaining buildings at his leisure. This tactic can also work in reverse; careless Spies sapping an exit may wind up being telefragged by an Engineer repairing the entrance. Similarly, Engineers can place their Teleporters at chokepoints and telefrag enemies as they walk over.