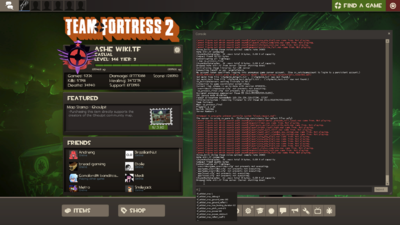 A screen of the Developer Console found in Team Fortress 2

This article has a list of console commands below. Using the Developer Console, you can turn specific gameplay and graphic settings on or off, or modify their values. The console can be enabled from the advanced menu in options or via Set launch options. Any command put in the autoexec.cfg file will automatically be loaded on game launch.

For a complete list of Team Fortress 2 console commands and variables, see the Valve Developer Wiki.

The following commands were introduced by the Demo Support feature (see May 31, 2016 Patch):

The "use" command is used to switch to the specified weapon.

use is similar to the 'slot' commands, but cannot be used for voice commands.