From Team Fortress Wiki
Jump to: navigation, search
This article is for Competitive play, based on the Standard competitive format. For the generic article on this topic, see: Gullywash.
Competitive articles are currently in development. If you have any questions, just ask.

Gullywash Pro is the final version of the community map made by Arnold. The map has some interesting control points that have more than one layer, the middle point is a good example; Soldiers and Demos can jump on the top of the point and start to capture it, Scouts and other classes that can't reach the top can also capture the point by standing close to the side.

The objective of Gullywash is to control all five capture points. Each team starts with their second and final control points locked, leaving only the middle point available.

Whilst not as popular as Badlands, Gullywash is still regularly played in competitive tournaments. It is a good map for specialists since its layout allow for most of them to take fully advantage of their own perks.

All place names are given from the perspective of defense as their primary name (in terms of left and right), except obviously for the middle control point. 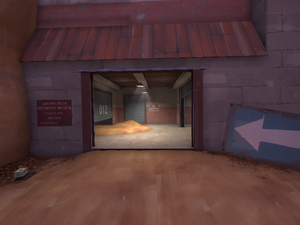 Because of the symmetrical style of Gullywash, each team share a similar landmark/location on their respective sides of the middle point.

This is where the Soldiers and sometimes Demos will come out of.

If the enemy team are running a Sniper, this would be the proper place for them to stand on, since it allows them to headshot people who are on top of the point, or near it.

The Demos and Scouts usually come out from this spot. It allow explosive classive to directly either perform a Rocket or a Sticky Jump towards the point or back to the Door. This means the Combo will take damage by attempting to get into the middle, making the operation risky.

Naturally, if the enemy have a Heavy with their ranks, he will be able to lock down the area for his teammates thanks to the relative exposure that his opponents will have to face in the situation where they actually attempted to take a fight here.

This is what the area under the point is referred to, and it stretches from the RED Door to the BLU Door. 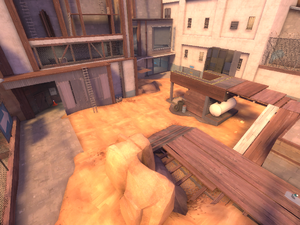 The second point share the same features that the middle point does, there are two layers that can capture the point, the capture can be blocked if an enemy stands on either of the tiers.

Being a very open area, this point can favor classes who can boast superior mobility or who are able to abuse the double-layer system thanks to their kit, making generalist obviously well-suited to the situation.

Ironically, even though the Heavy is limited in terms of his mobility options, his large health pool as well as his powerful primary can make him totally viable here.

Another specialist who is interesting to play there is the Pyro since he not only have options that helps him re-position himself in the middle of the fight, but most importantly an airblast that he can easily abuse to counteract the tactics of the explosive classes who would be trying to defend the Point for an example.

This is the high ground that the defenders can hold if they have Ubercharge disadvantage, it's akin to the Badlands Upper Lobby hold.

If the Door is the entrance, then this would be the exit. It also leads into the Lower Lobby.

If the team guards this place with multiple heavy classes (Soldier/Demo/Heavy/Pyro), then this position can effectively be covered by the team.

When one or multiple players from the losing team begin their retreat, they will most likely sit there since the Lobby possesses both a single medium health kit and ammo pack.

As the final point, specialists end up being commonly used by the losing team to defend the area.

So, a Heavy can for example push any jumping Soldiers back and generally slow down, or even downright nullify an enemy assault, while an Engineer can place a sentry on many strategic spots to make this area that much more harder to contest.

It is possible for a Heavy in the losing team to stand right beneath the rim of the control point, letting only his eyes go above the point, which effectively allows him to "Ledge-Pick" whoever dares to step their foots onto this vital position.

Inversely, a Heavy from the winning team can also position himself on the same are if he already traveled through the Riverside and the Water areas, which allows him to secure the last point for his fellow Scouts and Soldiers, or even capture it by himself if the enemies are unable to prevent him from doing so in a direct combat.

A small corridor that Demos enjoy to spam through. It leads directly to the Water.

Even though there is no longer any water, it's still affectionately referred to in the same way. It provides another way to access the point.

The Scout, the Heavy and the Spy can thoroughly take advantage of this area to secure a surprise capture.

Gullywash Pro and it's other iterations have been around for a while, and because of it, multiple tactics were developed by the competitive playerbase to gain an advantage on this map.

The standard Demo rollout on Gullywash involves a static jump to the door, with a sticky jump to a door way off of the right wall outside of spawn.

From there, walk out of Door or jumps over second depending on where he wants to enter.

If you arrive through choke, you should fire a sticky at their Door to try to lock out their combo.

If you arrive through the Door you should fire on their choke.

The Soldier rollout is simple.

Jump off of the right wall outside of spawn, walk through main, and walk through the Door. Once arrived to the mid, you can either jump spire to take control, or bomb the demo for an early pick.