From Team Fortress Wiki
Jump to: navigation, search
This article is for Competitive play, based on the Standard competitive format. For the generic article on this topic, see: Medic.
Competitive articles are currently in development. If you have any questions, just ask. 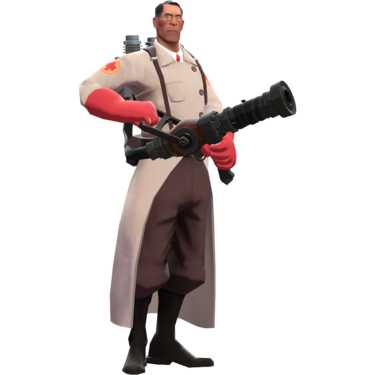 The Medic (oftentimes shortened to "med") is a core member of the standard competitive lineup, valued for his healing and ÜberCharge abilities, as well as being able to predict the enemy Medic's ÜberCharge percentage and the ability to focus on Main-Calling(also known as Primary-Calling).

Note: The Vita-Saw is banned in all competitive leagues.

The Medic mostly relies on his Medi Guns to keep the team healed. His Syringe Guns are his only source of damage at range, and are mostly used as a last resort. Some of the Medic's melee weapons, such as the Übersaw provide useful benefits, but are still auxiliary to the Medic's core; healing. However, the Crusader's Crossbow is a very popular choice by many Medics, its ability to heal and deal damage over massive ranges make it quite viable for quickly picking of classes as it can easily do over 70 damage. It can also heal at long ranges which can help team mates in the most dire of situations but still allow the Medic to stay a safe distance.

The Medic is one of two classes (the other being Demoman, and in some leagues Heavy) that is limited to one per team in all major leagues. Also, like the Demoman, the Medic is almost always present for entire games on both teams, regardless of strategy or lineup; only rarely will the Medic resort to changing classes in order to delay a final point capture so that the rest of the team can respawn and help defend.

The Medic's ability to Über/Kritz is a keystone of competitive dynamics, acting as one of the most important factors when teams decide to push, hold, or retreat.

The Medic is a support class, and is the healer of the team. His main job is to heal wounded teammates, overheal teammates in anticipation of an upcoming fight, and aid a team push with the game-changing ÜberCharge.

The Medic should try to build ÜberCharge as quickly as possible. He should heal teammates who are damaging themselves for you; Scouts with the Boston Basher, or Three-Rune Blade and Soldiers who deal self-damage with their own rockets are the best candidates, but if it's only the Demoman and Medic who are alive, the Demoman can help build the uber. The sooner the ÜberCharge is fully charged, the sooner the team can make an effective push.

Survival is of utmost importance to the Medic. The Medic is the enemy team's highest priority target; a team without its Medic alive is likely to retreat or lose the match, as healing is difficult with health packs scarce and the team will not be able to counter an enemy's ÜberCharge with their own. The Medic's worst enemy will be the enemy Scouts. Scouts can kill the Medic with two close range shots, and run fast enough to flank the Medic's team and attack him unexpectedly. Medics should warn their Pocket Soldier whenever they spot an enemy who may be attempting to kill them, as it only takes him two well placed shots from any combat class to deprive a team of its most important player.

Therefore, the Medic should never be alone; he should always be with his Pocket Soldier. He should also do his best to avoid getting hit by stray bullets or projectiles and keep his health as high as possible so that a flanking enemy Scout may not kill him in one shot.

As a support class, the Medic has limited offensive capability and should not use the Syringe Gun unless he is retreating. Even an enemy with low health is likely to kill the Medic in a one-on-one fight. The Medic should let his Pocket player get the kills and take the damage that he would have taken.

Because of his overview of the battlefield, the Medic is often the primary caller in competitive play, being the ultimate authority on pushing and retreating and on tactical calls (attack targets, rollout routes, etc.). Primary calling requires the Medic to have good judgement, memory, and prediction. The Medic needs to remember roughly what ÜberCharge percentage the enemy Medic has to determine his own team's ÜberCharge advantage; to know the enemy's ÜberCharge percentage will allow the Medic to confidently direct a push knowing that the enemy team will be unable to counter the ÜberCharge. The Medic must also keep track of his own team's player advantage, taking note of whether his team is outnumbered or not. A Medic who does these two things will make better calls and lead his team to victory.

Since the Medic does not actively concentrate on directly fighting, the Medic will often be the leader of the team, giving instructions regarding when to push or retreat and remembering the ÜberCharge percentage of the enemy team.

Ideally, in the rollout at the beginning of the match, the Medic should strategically overheal each team member so that everyone reaches the midfight as fast as possible with as much overheal as possible. To do so effectively, the Medic must consider the order in which players arrive at mid, the means by which they arrive (i.e., by running or by explosive jumping), and the impact of the healing ramp. Fully overheal the Demoman to 260 health, then flash-heal the Soldier to 300. Often the other soldier will resort to the Escape Plan and run with the Medic, so he can be healed later. The Demoman will reach the midfight at full health, and the soldiers fully overhealed. Because all players are fully ramped upon spawning, overhealing Scouts to 185 will take hardly any time.

During the mid fight it is important to prioritize the players that are under pressure and taking a lot of damage; this takes precedence even over people who are injured, they can get a health kit or wait. After a while they will get critical heals and can be flashed up to full health. Of course you have to apply this sensibly, when you can heal the wounded members of your team then by all means do so, just when a teammate who has gone aggressive is starting to lose health then you need to focus on him and keep him alive. Sometimes as a Medic it's safer to be in the thick of the combat rather than hanging around on the edge. At least that way all of your team can easily access you and get heals.

During the race to the mid point that occurs at the start of a round on a 5-CP map, Medics will usually heal their teammates in order of their ability to reach the mid-point quickly. Medics should always heal their team's Demoman first, because the Demoman's sticky jumps use up a good deal of health and can send him far beyond the range of the Medi Gun, where he will lose a source of health. Getting a team's Demoman to the mid point quickly can enable him to block the enemy team and most importantly the enemy Demoman, allowing the rest of the team to get onto the mid point and push the enemy team back. The more health the Demoman receives from a Medic, the more he will be able to sticky jump, and the faster he will arrive at the mid point. Although not necessary, healing the team's Scouts can prove to be very effective. An overhealed Scout will easily have the upper hand over non-buffed enemy Scouts or negate any buff the enemy Scout has. Next in line for healing should be the roaming Soldier and then finally the pocket soldier who equalizes most of the way to the mid point to have "Crit Heals" which results in a slightly faster Über build and a faster heal. If the team chooses to use the Kritzkrieg at the fight for the mid point, the team must try to kill the enemy Medic and Demoman. If one team uses the Kritzkrieg and the other uses the standard Medi Gun, it is imperative that the Medic using the Kritzkrieg finds an Über-target (Soldier or Demo) who is fully loaded and unleashes the Kritz charge as soon as possible, as waiting too long may result in the enemy Medic filling up his own ÜberCharge meter. This would be disastrous for the team using the Kritzkrieg, as a standard Über can completely negate the effects of the Kritzkrieg's charge.

When defending on an Attack/Defend map, it is absolutely critical that Medics watch their backs at all times and look out for any threats. The loss of the defending team's Medic may easily mean the loss of a control point, and a defending team can't simply wait until their Medic respawns to take the point back like they can on a 5-CP map. If the defending team has an Engineer with a Sentry Gun up, it may be a good idea for the Medic to stay close to the Sentry Gun, as it will provide excellent protection against enemy Scouts.

As well as the general "keep out of trouble" motivation that all competitive Medics should have, in capture the flag games Medics should be supporting pushes, or defenses, on their Intelligence. Unless the Medic feels confident, he should not pick the Intelligence up as this will draw attention to him and give the enemy the position of the most important player on your team, i.e., you. Because of the likelihood of the enemy fielding an Engineer, it is more common for Medics to play a normal Über as opposed to a Kritzkrieg.

Although it mostly depends on skill, some classes are designed to have an advantage over others, The Medic is very reliant on his Team mates for protection as his weapons are not intended to deal high damage making nearly every class a large threat to a Medic. However, higher skilled Medics can have a very good DM (Death match) against other classes such as Scouts, it is also worth noticing that a Medic equipped with the Ubersaw is extremely dangerous and it is advised you keep your distance when an enemy Medic has pulled it out as he can kill you with his high damage melee weapon and get 25% free ÜberCharge from you, which could possibly give the enemy team an advantage and cause you to lose a point, or possibly even a round.