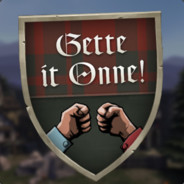 The tournament has several in-game medals, distributed to players based on their positions.

Classes are limited as such:

Gette it Onne! utilizes the standard Medieval Mode whitelist, which allows for all melee weapons and the weapons shown below: