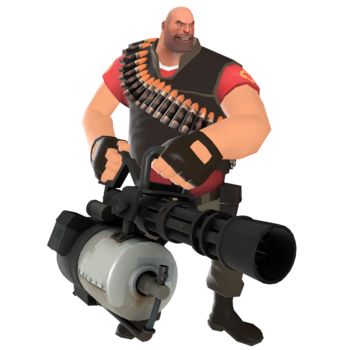 This article is for Competitive play, based on the Standard competitive format. For the generic article on this topic, see: Heavy.
Competitive articles are currently in development. If you have any questions, just ask.

The Heavy is considered a situational pocket and utility class sometimes used in the standard competitive lineup. Heavies are valued for their tanking capacity and sustained damage output.

The Heavy uses his primary weapon to deal large damage at close to medium range. Heavies are slow, and even slower while spun up. Many players counteract this by jump-revving (spinning their minigun in mid-air) which can be useful in ambushing; or will use the Gloves of Running Urgently to get to a destination more quickly. Note however, that the Gloves of Running Urgently are banned in many competitive leagues.

Due to his slow speed, the Heavy is a situational utility class. However, their large amount of health and high close-range damage output makes Heavies ideal for holding crucial Control Points, especially the final Control Points of 5-CP maps like Badlands. In Sixes play, a team will generally switch out a Scout for a Heavy when trying to hold the last point, though substituting a Soldier for a Heavy is also common.

First and foremost, it is recommended to read the player-based Highlander Heavy guide[1], in order to reach a larger understanding of the class.

In general, the Heavy is often used when defending the last Point on 5 CP-maps, or on A/D maps such as Gravel Pit. Usually in this case, a team's Medic will focus on healing the team's Heavy, as the Heavy is able to possess a maximum amount of 450 health. This allows the Heavy to absorb a lot of damage and delay the enemy team more as opposed to a lower health class. The Heavy is also able to output very high damage at close range, which is crucial for keeping the Medic alive. Often the Heavy will replace the Pocket Soldier, or perhaps allow additional Soldiers to act as Roamers.

Teams will very rarely use a Heavy at the start of a 5-CP map. His slow speed means that a team starting off with a Heavy will typically attack the mid point with one less player than the other team, which may make the difference between winning or losing a mid fight. His high health makes him a useful defender in this game-mode, which is why he is often used on last point holds.

If a team needs to defend a relatively open area where there is little cover, a Heavy may be useful in buying time for the rest of the team to organize and repel a push because of his large amount of health.

When defending on an Attack/Defend map, the low mobility of the Heavy is mitigated somewhat, as enemies will come to him instead of the other way around. This allows him to keep his Minigun spun up without worrying as much about needing to quickly move around, compared to a Heavy on offense. Even so, Heavies are still very vulnerable to spam and/or crossfire sent towards the point, as their large frame and slow movement makes them more easily targeted than faster classes such as Scouts.

The Heavy can be a great asset when defending the Intelligence room in maps such as Turbine, where there is a very little cover. A fully buffed Heavy can halt an enemy advance and repel attackers, assisting the team's Engineer in the defense of the Intelligence room. If a team that is attacking the enemy intelligence chooses to use a Heavy, a useful strategy may be to let his teammates pick up the enemy intelligence, then provide cover to them with Minigun fire as they make their escape.

As the Heavy is slow, it is easier for the Sniper to snipe him than other classes. He is especially vulnerable while eating a Sandvich, as he must stay still to eat it. The Sniper can also use Jarate to counter his high health, though it’s mostly effective when using the Sydney Sleeper.

As the Heavy is slow, it is not difficult for a Spy to backstab him. The Heavy may counter this by using the Huo-Long Heater. Like against the Sniper, he is especially vulnerable when eating a sandvich.