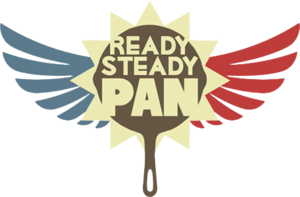 RSP (Acronym for Ready Steady Pan) is a variation of the 6v6 competitive format, revolving around the use of the Frying Pan. The tournament's simplified setup is intended to be a low-pressure way of introducing players to the 6v6 format and mindset.

The tournament has several in-game medals, distributed to players based on their positions.

Classes are limited as such:

Engineers and Spies are excluded from the tournament, as they cannot equip the Frying Pan. Medic and Heavy are excluded for their passive health regeneration and large health pool, respectively. Snipers have been limited to one per team, due to the effect Jarate had in matches during previous seasons.

The Ready Steady Pan tournament uses its own whitelist, which only allows players to equip the Frying Pan as their main damaging weapon, alongside select other non-direct-damage weapons. The Machina and Shooting Star are also allowed, in order to prevent accidental misfire. The currently allowed weapons are:

The format became quite popular in the TF2 competitive scene, due to the matches being funny and entertaining to watch, and the tournament's unique setup proving enjoyable to play for the competitors. The tournament proved very popular in Europe, due to exposure from the TF2 Retrospective events. The third season of Ready Steady Pan gained many more players as a result, from Europe, America and Oceania.