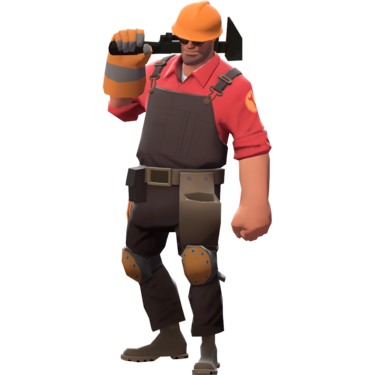 This article is for Competitive play, based on the Standard competitive format. For the generic article on this topic, see: Engineer.
Competitive articles are currently in development. If you have any questions, just ask.

The Engineer (oftentimes shortened to "engy", "engie", "engi", or misspelled to "engine") is a situational utility class sometimes used in the standard competitive lineup, valued for his defensive support and area denial capabilities as-well as being able to keep the maximum amount of pressure on the enemy team with his teleporters.

The Engineer uses his PDA Build and Destroy tools to construct buildings to help his team. He uses his melee Wrenches to upgrade, repair, and re-stock them.

Note that all the Engineer's melee weapons are capable of building, repairing and upgrading buildings, as well as removing Sappers.

Damages and times are approximate and determined by community testing.

The dynamic gameplay of competitive Team Fortress 2 on 5-CP maps makes the Engineer, with his need for time to set up his buildings and slow move speed less than useful. On the flip side of things, Engineers' usefulness increases dramatically on Attack/Defend maps such as Gravel Pit, due to his Sentry Gun's ability to counter the opposing team's Scouts. Because the enemy team's two Soldiers and single Demoman are very capable of destroying an Engineer's buildings, Sentry Guns are usually considered temporary measures to stall an enemy team. Using a Sentry Gun to aid a defense is very useful for buying time, which is essential for defenders on maps played in the Stopwatch format.

When building their Sentry Guns, Engineers must keep in mind the fact that they are mainly building it to ward off jumping Soldiers or Demomen and to take the brunt of the enemy ÜberCharge. An aware Soldier or Demoman will have little trouble destroying buildings. Sentry Guns should be placed in a location relatively safe from pipes and rockets spammed from afar, but useful against any enemies who try to flank or try to capture the point.

Engineers need to keep a look out for Spies who can easily destroy their buildings. The Teleporter is an important building, it negates part of the defending teams longer respawn time by allowing them to quickly get to the point and defend it, without it, each loss that the defending team takes is harder to replace and weakens their grip on the point.

The Dispenser is also important, not only does it allow players to quickly and easily replenish used ammo, the Medic can also hide within the Dispenser if a Scout attacks. Though this might not get rid of the damage completely, it will reduce it and give the Medic's team mates longer to kill the intruder.

When Engineers are used in Control Point matches, they are usually used to defend the final point within the teams' base, preventing back-capping by Scouts, as well as stalling the enemy Soldiers and Demoman. The main idea behind using a Sentry Gun is that the enemy team will have to focus on killing it before they can attack anything else, this can give the Medic time to build up an ÜberCharge and push forward.

An aware enemy Demoman, however, will easily dispatch the Engineer's Sentry Gun with relative ease using either the Grenade Launcher or Stickybomb Launcher. Outside of the last point, Engineers rarely see play, due to his Buildings' slow haul speed and the need to keep up with the rest of the team.

One of the most significant uses of the Engineer in competitive play is on Attack/Defend maps. Setup time allows the Engineer to build his base up without being harassed by the enemy team. This makes starting off the map with one Engineer a popular choice for defending teams. Because competitive Attack/Defend maps are played with the Stopwatch format, Engineers will want their Sentry Guns to stall the enemy team for as long as possible. While it is important to actively participate in the defense of control points, a level 3 Sentry Gun is not as disposable as it is in other game-types, due to its effectiveness against enemy Scouts. Thus, it is important to keep a Sentry up for as long as possible, providing a safe zone where teammates need not fear attack from enemy Scouts.

In a Capture-the-flag game, Scouts are valuable, as they are able to pick up the intelligence and run off unharmed. They are fast and agile enough to avoid prolonged combat with their enemies, and for this reason, a team will generally need to be able to counter any attack on the Intelligence by Scouts. The Engineer is thus used at the beginning of most Capture-the-flag games, and sent to their teams' Intelligence room to build. The large distance between the Intelligence room and the enemy's spawn room gives the Engineer time to set up a base and stall an enemy attack on the intelligence with a level 3 Sentry Gun. The Sentry is effective against incoming Scouts, and, with enough support, can become the cornerstone of a successful defense of the Intelligence room.

When playing Engineer in 6 vs 6 play it is best to play when contesting your team's last point. In this format, it is common that a Scout switches to a class that is good at defending points such as the Engineer. A good strategy to do is use the Gunslinger for a quick building, disposable Sentry. When using a level 3 Sentry Gun, it is best to hide it in a position out of your enemies' line of sight.

The Engineer is a very stationary class as his buildings are also stationary and normally require the Engineer's attention whether it would be repairing and upgrading, this leaves him very vulnerable as he has his wrench out and he is next to his buildings which are normally under fire.

The Demoman is probably the biggest threat to an Engineer in nearly every game mode whether it would be 6v6 or Highlander, due to this the Engineers will try to make it as hard as possible for the Demoman to destroy their buildings such as being in elevated plat-forms or open areas where the Demoman cannot shoot his sticky-bombs or grenade pipes without being harmed. The reason why the Demoman is such a large threat is due to his ability to deal massive damage and that he can fight in-directly keeping him safe from the Sentry Gun's range, an un-wrangled level 3 Sentry Gun can be destroyed with 3 sticky bombs or less. However, if the Engineer has The Wrangler and a Rescue Ranger equipped he can make a Demoman's job much harder as the sentry gains a 66% damage resistance from the shield and the rescue ranger allows the engineer to safely repair his buildings for light damage without being killed by the Demoman's sticky bombs.

The Soldier similarly to the Sniper, can shoot the Sentry out of it's range and still deal high amounts of damage to it, especially if the Direct Hit is equipped allowing two shots at any range to destroy a level 3 Sentry Gun that isn't wrangled. Additionally the Soldier can inflict splash damage to other buildings and the Engineer creating multiple problems for the Engineer. The Soldier can also Rocket Jump to surprise attack the Engineer and kill him leaving his buildings vulnerable. However, the engineer can again use the wrangler to fire at the Soldier from outside of the sentry gun's range, and use the wrangler in combination with the rescue ranger to protect the sentry gun using the shield of the wrangler to give the sentry a 66% damage resistance and the rescue ranger to either begin hauling the gun away or to heal the damage dealt.

The Spy can disguise as enemies and cloak; both prevent the Sentry Gun from targeting the Spy, allowing the Spy to breach the enemies defenses and attack the Engineer when he is alone or vulnerable, skilled Spies can easily kill the Engineer and sap his Sentry Gun with the Sapper before it turns around and kills the Spy. Sapped buildings are vulnerable as they slowly take damage until they are destroyed and cannot function. However, the Pyro can be an excellent Engineer buddy as his ability to deflect projectiles, find cloaked and disguised Spies and if equipped with either the Homewrecker or the Neon Annihilator the Pyro can remove the sappers from buildings.