From Team Fortress Wiki
(Redirected from Hacking)
Jump to: navigation, search
Not to be confused with Cheats, which are console commands that need sv_cheats 1 to work. 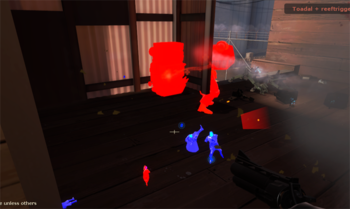 Cheating is a term that describes the use of third-party programs or material changes in order to gain an unfair advantage.

Valve has a strict policy against cheating and will ban detected cheats with the Valve Anti-Cheat system, also known as VAC.

Players can be reported in game via the scoreboard or by pressing escape, clicking the report button on the menu, or by sending an abuse report (Default key: F7).

Most cheats take the form of:

These cheats are referred to as "internal cheats".

"External cheats" also exist. They do not "hook" but they read/write the game memory externally. These are fairly uncommon in Team Fortress 2.

These are features in cheats that work in the latest version of Team Fortress 2.

Some community hosted servers have a plugin which is able to unlock all achievements in-game with a special command, granting all achievement items. This can also be achieved by using third-party softwares.

Automatically aim at an enemy for the player. This can be customized to ignore Spy's cloak, disguise, or Medic's Vaccinator and have "legit" features such as smoothing.

There are multiple variants of this, which include Hitscan Aimbot, Melee Aimbot, and Projectile Aimbot.

Some cheats disconnect and reconnect to the server in order to bypass autobalance.

Anti-Aim modifies the view angles of the player by editing the values in pitch or yaw (roll has been patched in later source engine versions) into an out-of-bound value, so the viewmodel can appear facing one direction, when in reality the real hitbox is facing the other direction.

A limitation of Anti-Aim is that the visual hitbox cannot be facing away from the direction of fire, i.e. when the cheater fires forwards, the visual viewmodel snaps forwards.

Anti-Anti Aim, or Aim Resolver, attempts to brute force the enemies real viewmodel by shooting at certain locations until a headshot is made. Certain cheats can also "force" an enemy cheaters' viewangles, so that they may manually resolve their anti-aim.

Anti-Resolver, or Jitter, is when your cheat randomly changes its anti aim angles in order to throw off other aimbotters resolvers.

This is only active in conjunction with Bunnyhopping, as simply strafing left and right on the floor will no longer give you a speed boost due to the speed cap that has been added from the release of the Source Engine.

Abuses the Source Engine's lag compensation to "send people back in time". Cheats can backtrack up to 200 milliseconds, or ~13 ticks on 66 tick servers. Signs of cheaters using backtrack are when a player is killed after walking behind cover, however this may be due to latency issues. If a player or bot is holding the Intelligence / Mann vs. Machine bomb and they get backtracked, the Intelligence (or bomb) gets teleported to the position they were backtracked to.

NPCs, such as tanks or ghosts can not be backtracked due to them not being lag compensated. Cheaters cannot backtrack with projectile weapons due to the same reason.

Often people accuse players who seem to facestab them of abusing the cl_interp command. In most cases, this simply is not true.

Automatically jumps when you land which prevents the game from slowing your velocity down.

Partially fixed in the October 31, 2007 Patch by lowering the maximum air velocity while in a 'jump' state, however bhopping still gives a slight speed boost when combined with air strafing.

Allows cl_interp to be set to 0. This is only for increasing accuracy, and does not have much effect on gameplay.

To fix constant criticals, Valve released a new random crit system which requires players to fill a bucket by shooting before they can receive random crits.

It's possible to "store" random crits by filling up the crit bucket (range 0-1000) and sending crit requests to get crits on demand as long as you have it filled. Some weapons can take longer to receive crits as they require a bigger bucket.

Melee weapons do not follow this crit bucket system, which allows them to crit 100% of the time with cheats. For a short period it was discovered that weapons with "No Random Crits" could still crit (0.015% chance). This was abused to get nearly constant crits on these weapons until it was fixed in the Meet Your Match update.

Spams messages in chat, normally advertising something. Some cheats abuse newlines / linebreaks to "clear" chat and make only their messages visible.

Prevents detections on servers running community-made anti-cheats such as Sourcemod Anti-Cheat or Little Anti-Cheat by either 'legitimizing' features, or by abusing exploits.

Cheaters can load a temporary custom item schema that normally defies the rules of the item schema provided by the game.

Things custom item schema can do:

This does not allow for any economy breaking exploits as Valve has added extra measures to prevent that from happening.

Abuses packets so the server doesn't update your position for a maximum of ~23 ticks. To others it looks like they are "lagging", but their ping will be relatively low and from their view the game looks fine.

Due to the nature of fakelag, it is mostly used to counter cheaters to make their aimbot miss.

Fake Latency can refer to 2 things.

Exploits the queue region matchmaking system to result in much faster queue times.

Allows for FOV (also known as Field Of View) to be manipulated beyond the range of 55 to 90, the default range accessible to non-cheaters.

Allows for attributes such as spells to be usable in non-halloween games.

A bot that can perform actions without user input. Commonly used to assist cheaters or cause mayhem.

Unlike regular bots, these bots are different because of how they are presented. For instance, regular bots are able to freely roam around a specific map, while walkbots must have a set path that is created by the host.

These bots will usually walk on a predefined path and aimbot at the location set. Unlike regular bots, walkbots do not detect Sentry Guns, and will usually walk straight into their line of sight, allowing for a well-hidden Engineer to easily deal with them.

Says a message when a player is killed, normally insulting them with the victim's steam username, class, or weapon.

Allows cheaters to use any noisemakers that have limited uses without actually using their limited use.

Removes any bobbing received by shooting weapons or getting hurt, mostly cosmetic but can help with aimbot accuracy.

Under the same category as No Spread, this removes any inaccuracy projectile weapons have, such as Beggar's Bazooka deviation or Huntsman charge inaccuracy.

When Valve patched "viewangle speedhack", they only patched it for people standing, the patch does not apply to cheaters that crouch and can be easily seen as they crouch and walk backwards.

This will allow cheaters to crouch at walking speeds.

If the server runs long enough, the seed value (which determines the spread for client weapons) will be a big floating point.

This introduces a big imprecision (as it gets rounded more and more). The client can predict the pattern generated by the server as you only need a value approximately close to that of the servers, and the rounding will do the rest, which will allow for no spread-like properties to work again. This doesn't work that well on Valve's Casual servers due to them not running for a long enough, however it can work well on some community servers depending if they automatically restart or not.

Allows cheaters to go into thirdperson regardless if the server has 'sv_cheats' set to 1 or has any plugins installed on a community server.

Originally a bug that would allow player actions when taunting if you taunted right before you fell off something. Cheaters took advantage of this so they could taunt slide whenever they taunted, without needing to fall off anything.

This was fixed in an update but is still partially possible, using moving taunts to instantly turn without any turn delay, or moving sideways while using the taunt.

Spams an audio file into the voice chat system.

Also known as VAC Disabler, this cheat has been built into many cheat injectors and causes VAC to not verify the game files. This however does not remove VAC Bans.

Allows the client to "warp" on command up to ~23 ticks on Valve servers (value is dictated by sv_maxusrcmdprocessticks) by sending multiple usercmds after faking packet loss. This will cause the player to teleport ~23 ticks (roughly a third of a second on 66 tick servers). This feature exists due to the way the game compensates for packet loss, and can be broken down into airstucking and speedhacking for a short period of time.

This can also be utilised for another feature commonly referred to as doubletap, which allows firing in quick succession.

These are features in cheats that have been patched by Valve within content updates.

Cheaters could rapidly unlock and relock achievements, which would spam the chat and constantly play the achievement earned sound.

This was fixed sometime in 2014 by Valve adding a limit of how many achievements can be displayed in chat at once.

Cheaters could type 'retry' on Quickplay accepted servers in the Developer Console right before a votekick would go through, making the vote useless.

Fixed in July 7, 2016 Patch with the introduction of Casual Mode.

Causes a cheater to float in mid-air by sending no usercmds to the server.

This was found to contain various exploits, such as:

Fixed in April 20, 2017 Patch by introducing a new command 'sv_player_usercommand_timeout' which will require cheaters to send a usercmd depending on the value set, setting to 0 disables the fix.

Originally cheats could get 100% crits by setting the tickcount to when they would get crits.

Fixed sometime in 2013 with the introduction of the crit bucket system.

Hitscan refers to weapons that use hitscan to hit players, like Shotguns or Pistols.

Fixed in July 23, 2015 Patch by introducing a new command 'sv_maxusrcmdprocessticks_holdaim' which allows servers to hold client ticks for multiple ticks, setting to 0 disables the fix.

Normally when you're revved up with the Heavy's Minigun, you can not jump. Cheats could remove this restriction by simply telling the game that you're not revved up.

Predicts or changes the seed of a weapon to remove/reduce weapon spread.

Fixed in July 23, 2015 Patch by making the server control the seed instead of the client.

Steals the names of players to get them kicked or help cheaters avoid kicks.

Valve introduced several fixes to mitigate the issue of namestealing, such as:

Fixed in September 16, 2021 Patch that disables the ability for 2 or more players to have the same name in a server.

Caused by cheats sending a lot of usercmds at once. Fixed across the Source Engine games by limiting the number of usercmds accepted at a time.

Another form of speedhacking rose soon after the patch, known as "viewangle speedhack", it would allow for higher than normal velocities, but wouldn't have the same effects of normal speedhacking.

Original speedhacking was fixed sometime in 2013, viewangle speedhack was fixed in July 24, 2014 Patch.

This hack helps you charge the scope faster/instantly.

Sending too many commands per tick could cause the server to rubberband or completely freeze players, often causing connected players to time out.

This was partially fixed in the June 7, 2018 Patch by limiting the number of commands a player can send per tick, however, some Community servers are still affected.

Abused the netchannel to skip sequences. Nearly all conditions could be removed such as fire/bleed.

Depending on how many sequences you skipped, cheaters could break player lag compensation, making it hard for people to hit the cheater with hitscan based weapons.

Other side effects included:

The remove conditioning effect could be done by legitimate means by purposely freezing the game (such as spamming snd_restart) to desync yourself from the server.

Condition removing was fixed in November 7, 2017 Patch, but some of the effects still remained, which were patched at a later date.