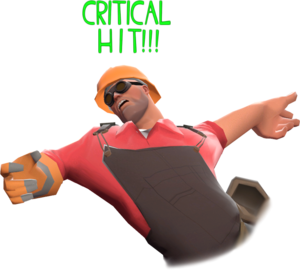 Critical hits, also known as crits or full crits, are attacks that do extra damage and have distinctive sound effects when fired and upon hitting a target. Players on the receiving end of the attack have the words "CRITICAL HIT!!!" in green, or "MINI-CRIT!" in yellow, respectively, appear above their head. Buildings are immune to both types.

Critical hits can be easily distinguished from normal hits. Most melee weapons have a unique swinging animation, projectiles such as rockets or stickybombs have a team-colored glow and sparkle effect (exemptions are the Cow Mangler 5000, the Righteous Bison, and the Pomson 6000), bullets have team-colored trails, and flamethrowers produce additional team-colored particles. These visual effects are accompanied by a crackling electric sound upon firing and receiving a critical hit.

Self-inflicted critical hits do not deal critical damage to the user, but still play the sound effect.

When a player is killed by a critical hit, the class lets out a loud scream that differs from ordinary non-melee deaths, unless the class was gibbed (in which case they let out a larger "ouch" noise than explosive kills usually cause). The kill feed icon for a critical hit surrounds the weapon icon with a red glow.

Among those weapons that trigger randomly, critical hit probability is determined differently based on the type of weapon. Single-shot weapons, such as the Shotgun, Revolver, and the Rocket Launcher, determine the chance to critical hit with every shot. Thus, every shot of the Shotgun has a 2% chance to launch a flurry of critical pellets, assuming no previous damage done. Rapid-fire weapons, which include the Minigun, Syringe Gun, Flamethrower, and the Pistol, check for critical hits once a second. With weapons like these, a positive critical hit determination results in all shots for the next two seconds being critical. This only applies to the active weapon; getting two seconds of critical hits on one's Pistol does not cause their Shotgun to fire critical hits during this time. 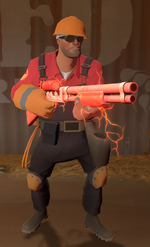 The following items cannot deal critical hits or mini-crits at all, usually because they cannot deal damage. Note that some of the items still glow when crit-boosted; there is simply no effect. 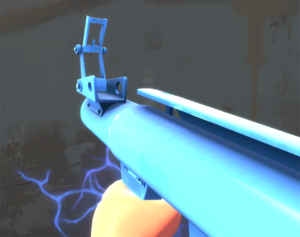 Crit boost is a state in which a player is guaranteed to deal critical hits with any weapon that is not specifically unable to score critical hits. A crit boost is indicated by the player's weapon glowing in their team color, with sparks of electricity surging and crackling from it. This affects most weapons that do not normally deal random critical hits, such as the Knife, Sniper Rifle, Gunslinger, and Eyelander, causing them to deal critical attacks for the duration of the boost; however, weapons that do not damage enemies (for example, Mad Milk, Jarate, Bonk! Atomic Punch, or Crit-a-Cola) do not gain any benefits from crits. Only the Cow Mangler 5000 is exempt from this rule, as it does mini-crits instead of critical hits. 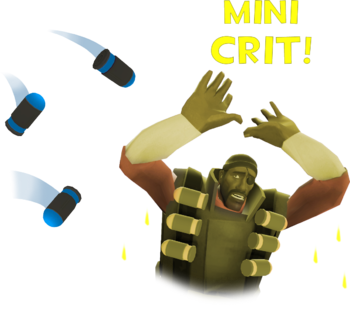 Icon displayed above targets "Marked For Death", indicating they receive mini-crits from all sources.

There are also currently six effects that force a particular player to take mini-crits from all incoming damage (See also: Marked For Death):

A mini-crit boost is the state of having all damage being dealt modified into mini-crit damage. Currently, this is achievable while under the effects of the Crit-a-Cola, an active Buff Banner, activating the Cleaner's Carbine's "CRIKEY" charge, and while under the effects of the Buffalo Steak Sandvich. When a player is mini-crit boosted from the Buff Banner, their active weapon glows a faint yellow on RED, or a faint blue-green on BLU, while the same color effect of particles swirl around their feet, and the text "Mini Crit!" appears above their health bar. Being mini-crit boosted by the Crit-a-Cola looks more like a normal crit boost, but the weapon glows lighter.