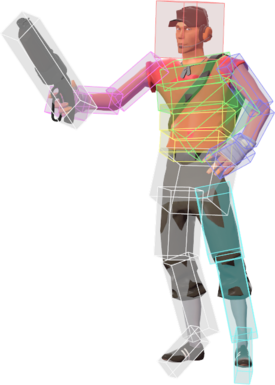 Hitscan attacks instantly damage targets in their path. All hitscan attacks emit down the crosshair, from the attacker's eye level, despite what is suggested by the view model and world model. Unlike projectiles, hitscan attacks are not code-rendered physical objects, but are infinitely-thin lines drawn on the server that are then rendered client-side visually as projectiles. Depending on the object hit and client settings, the hitscan weapon then generates an effect: dealing damage or painting blood and bullet hole sprites.

In technical terms, this means that hitscan weapons have infinite velocity, but this does not mean that they always damage instantly after firing.

Melee weapons, with the exception of the Spy's melee weapons, wait 0.2 seconds after input before initiating a short-ranged hitscan attack. This prevents the weapon from hitting or killing a foe before the melee animation completes.

Bullet-based weapons (a list of which is given below) fire seemingly infinite lines (the actual maximum range is ~56,754 units). Most bullet-based weapons are affected by bullet-spread during a 1.25 second cooldown after firing a bullet, which causes bullets to move off-course to varying degrees. The Ambassador gradually recovers its accuracy and can fire a perfectly-accurate shot after 1 second. Weapons that fire multiple pellets, like the Shotgun and Minigun, guarantee a pellet straight down the crosshair if the weapon was not fired within the last 0.25 seconds. When fixed weapon spread is enabled, shotguns will use a fixed spread pattern. For example, the Scattergun uses a fixed 3x3 pattern when fixed spreads are enabled. If a shotgun-type weapon fires more than 9 pellets at once, fixed spread will cause multiple pellets to hit the same location.

Hitscan weapons have the ability to destroy enemy stickybombs once they're attached to a surface. Unlike most projectile-based weapons, hitscan weapons are unable to penetrate friendly players. The only exception to this rule is the Sniper's primary weapons.

The following is a model-by-model video rendering of the bullet-based hitboxes: