The Connect Five Contest, also known as "Connect Five: The Original TF2Maps.net Boardgame", was a mapping contest run by TF2Maps that used a 6-by-6 square game board. Mappers had to make a map based on a 5-square column, row, or diagonal of their choice.

It resulted in 25 entries, 10 of which were finalists, and a combination of judge and public voting determined the winners. 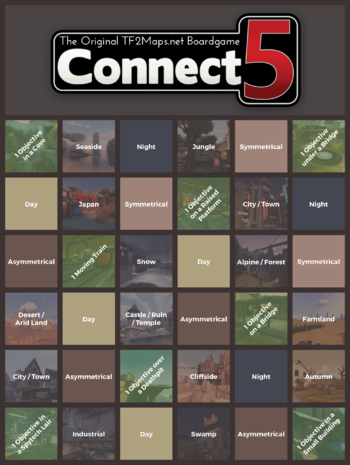 For a map to qualify as a valid entry into the competition, it had to be based on 5 squares from the 6-by-6 game board, either in a column, row, or a diagonal.

The contest used the following rules:

The following maps were entered into the contest:

Due to 25 entries, which was more than initially expected, the voting was divided into two stages:

Each forum member could vote yes or no on a map, these votes decided which maps made it to the finalist voting stage.

The 10 finalist maps were:

The finalist voting stage consisted of public votes and official contest judges' opinions, each accounting for 50% of the total score. The maps were rated in the following categories: