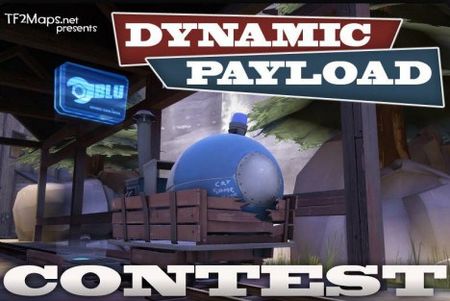 The Dynamic Payload contest was a map voting contest hosted by TF2Maps.net. Viewers were asked to help decide the top 3 dynamic Payload maps created by the mappers of the website.

Each mapper was given only 4 months to create a Payload map which could be entered into the competition. 27 entries were submitted, and the maps were opened to the community. After two weeks of preliminary voting, only eleven maps remained, and they were then voted on by judges, before finally being voted on by the public.

The deadline ended on the 30th April 2012, with submissions being opened a week beforehand.

Each map was judged on the following:

The three winners each were given a Map Maker's Medallion, and were shown on the site.

Definition of a dynamic element

According to the official forum post for the contest, a 'dynamic element' is any sort of Payload gameplay element that involves moving, turning, lifting, teleporting, cloning or turbo-boosting the Payload cart', for example the turntable on Barnblitz.