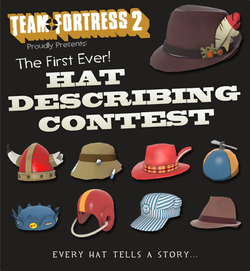 The Hat Describing Contest was a contest announced on August 24, 2010.

Following criticism that previous TF2 contests shunned players that lacked above-average skill in computer modeling, the TF2 team announced the competition in a blog post. The aim was to introduce a contest that would be accessible to the majority of the community, albeit those registered on the Steam forums. The object of the contest was to allow members of the community to write descriptions for the various in-game cosmetic items available at the time.

Winning entries, as selected by Valve, were added to the corresponding item in-game as an official description.

The deadline for the Hat Describing Contest was August 27, 2010. Submissions were posted in a series of specially-created threads on the Steam Users' Forums.