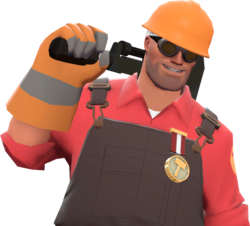 A custom map is a map created by third-party map makers for use in Team Fortress 2. Each map can vary in ideas and scale; some are incredibly simplistic, being modifications of official maps that fix minor issues such as map geometry, add additional pickups and flank routes, or simply include a weather or time shift to make the ambience different. Others are built from scratch and introduce completely new gamemodes, arenas, items or functions that spice up gameplay in a way that standard maps are unable to. While the majority of custom maps are only available to the server or players who download them directly, certain custom maps that have proven popular with the community and Valve-team alike may be directly added to the official Team Fortress 2 map cycle in major updates.

Upon joining a server currently playing a custom map, you will automatically start to download the map file if you don't already have it. You have the option to disable custom content downloads in the options menu; however, with this feature enabled, you will be unable to download custom maps from servers.

Main article: King of the Hill

There are many custom map collections on the Internet. These include: