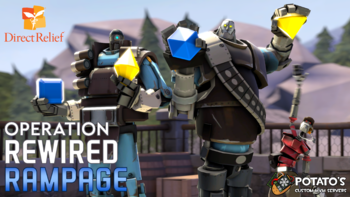 Operation Rewired Rampage is a reverse Mann vs. Machine tour organized and hosted by Potato's Custom MvM Servers. It was announced on February 23, 2022. A public beta was held for the tour on June 6 to 16, 2022, before officially launching on June 17, 2022. The campaign is scheduled to conclude on August 26, 2022.

On June 6, 2022, Operation Rewired Rampage went into public beta, with 19 missions spread across 14 maps, including official maps such as Coal Town, Rottenburg and Bigrock, as well as returning maps from previous community campaigns.

The tour launched on June 17, bringing with it another Expert mission on a new map. Patches adding new maps and missions were introduced throughout the campaign on June 24, July 9, and August 5, for a total of 25 missions, spanning 18 maps.

Unlike previous campaigns, players assumed the role of the robots, beginning missions from the robots' spawn points and attempting to plant the bomb in its hatch, in the same manner as the robots in official Mann vs. Machine missions, alongside other objectives. The campaign also utilizes new custom weapons, as well as rebalances to existing weapons and class stats.

There is no in-game reward for completing missions in the tour, though players may continue to track their tour progress.

This event has four medals up for grabs, as rewards for donations to a charity drive benefiting Direct Relief, in support of Ukraine. Players can donate varying amounts through item or monetary donations to receive donor medals.

The donor medals reuse the same models as previous gemstone medals from Operation Madness vs Machines, the Burnished Beryl, Royal Rhodonite, Grandiose Garnet, and Chaotic Crystal, respectively; however, the medals initially drop with a special custom painted team color based off the Ukrainian flag, that is not otherwise available in-game. The medals appear yellow on RED team, and blue on BLU team. The Reverse-Engineered Ruby drops with special team colors that are the negative inversions of Team Spirit, with reversed team placements, appearing cyan on RED team, and orange on BLU team.