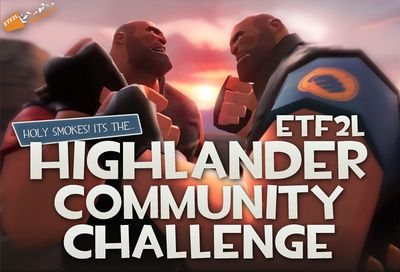 The ETF2L Highlander Community Challenge was a Highlander tournament hosted by the European Team Fortress 2 League (ETF2L) and supported by Valve. Aimed at bringing new players into competitive play, the tournament called for teams of non-competitive players to battle for prizes.

Standard competitive rules were used, such as no Critical hits and use of Tournament and Stopwatch modes. However, contrary to all other ETF2L events, every weapon other than those released in the Polycount Pack (with the exception of the Holy Mackerel) was allowed to be used during matches.

The Round 3 default map was changed to Badwater Basin as Steel was rendered unable to load after the Australian Christmas patch.

The decider map for matches played in the knockout phase was Viaduct.

In addition to the Highlander Challenge, a Highlander Ladder was announced that ran prior to the tournament. Unlike the tournament, the ladder was open to all players, allowing teams the opportunity to practice against each other as well as competitive players before the event started. The ladder used an ELO ranking system.

Tournament medals were distributed on August 30, 2011.