Cosmetic items (previously known as hats and miscellaneous items) are items that can be equipped in any one of the three cosmetic slots in the loadout screen. Valve introduced the first set of nine cosmetics in the Sniper vs. Spy Update, with one hat for each class. The nine hats introduced were the Batter's Helmet, for Scout, the Soldier's Stash, for Soldier, the Pyro's Beanie, for Pyro, the Demoman's Fro, for Demoman, the Football Helmet, for Heavy, the Mining Light, for Engineer, the Prussian Pickelhaube, for Medic, the Trophy Belt, for Sniper and the Fancy Fedora, for Spy. Several updates have since added additional cosmetics, including those designed and submitted by members of the Team Fortress 2 community through the Steam Workshop or the former contribution page on the TF2 Official Website.

While most cosmetics can be obtained through crafting, the item drop system, or bought from the Mann Co. Store, some cosmetics are only available to players via other means. Some cosmetics can only be obtained by completing in-game achievements. Others have been added as promotions for various Steam games, events in the Steam Store, third-party websites, and merchandise. While it is possible to obtain most of these cosmetics via trading, there is no option to purchase them from the Mann Co. Store (aside from those released with Total War: SHOGUN 2, Deus Ex: Human Revolution, and the QUAKECON Pack). Only players with the premium account type can receive cosmetics randomly through the item drop system.

With the release of the Mann-Conomy Update, Unusual quality versions of certain cosmetics have a 1% chance of being "uncrated" when the player opens a Mann Co. Supply Crate. Unusual quality cosmetics appear identical to their Unique counterparts except for the addition of 1 of 86 unusual particle effects. Effects are chosen at random from applicable groups (certain effects are only obtainable during special events) when the cosmetic item is obtained.

Cosmetics do not affect gameplay, spare the psychology of players. The Horseless Headless Horsemann's Head and the Saxton Hale Mask are rare exceptions, making the wearer immune to the Horseless Headless Horsemann's Boo taunt when equipped. Additionally, the Bootie Time, Jingle Belt, Jolly Jingler, Elf Care Provider, Elf Defense, Seasonal Employee, Elf Ignition, Elf-Made Bandanna, and Reindoonibeanie make jingling sounds, potentially revealing the location of the wearer and making them more noticeable. With the release of the July 10, 2013 Patch, Item sets from the Polycount Pack (with the exception of The Saharan Spy set, which adds custom particle effects while taunting) now only provide a visual cosmetic grave marker upon killing enemies.

Some cosmetics have holiday or event restrictions, meaning they cannot be seen (except in the loadout menu) outside the period of a holiday or event. Additionally, Pyroland items can only be seen by yourself and other players who wear item(s) that enable Pyrovision. Spectating a player that has a Pyrovision item equipped (with the "When spectating, view the world from the eyes of a Pyro" setting enabled in Advanced Options) also makes other Pyroland items visible.

On January 10th, 2013, a blog post announced that after January 24th, 2013, the original nine hats added in the Sniper vs. Spy Update would be retired, making them unobtainable through crafting, random drops, Mann Co. Supply Crates (in Unusual quality only) or the Mann Co. Store after January 24th. The only source left untouched were existing Mann Co. Supply Crates that had any retired hats listed as a possible reward from unboxing.

On December 20th, 2013, the "Head" and "Misc" slots for player loadouts were merged to form "Cosmetic" loadout slots. All items that were previously Head- or Misc-slot-specific could then be equipped in any Cosmetic-slot. 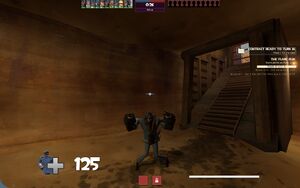 A BLU Spy wearing cosmetics meant for the Heavy.