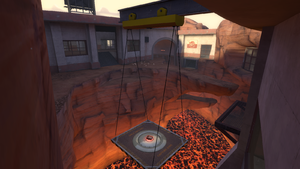 Upon starting a Mannpower game, the player is prompted to equip the Grappling Hook Action Item. The Grappling Hook allows players to cling to surfaces and move rapidly across the maps. The player travels in a straight line to the point at where their Grappling Hook connected to the surface, and cannot use any of their weapons. Spies can use their Grappling Hooks while cloaked or disguised, and their Hook's rope color will be the same as their disguise. By jumping while being pulled by their Grappling Hook, a player's upward velocity is increased, boosting the player ahead and allowing easier traversal of vertical terrain. The Heavy and powered-up flag carriers are exempt from this ability.

To complete the objective of the maps, the player must capture the Intelligence 10 times, as opposed to the usual 3 times of a normal CTF game. To capture the enemy team's Intelligence, your team's Intelligence must be uncontested and at its spawn point. Unlike regular Capture the Flag, the timer that appears over dropped Intelligence is not reset if it is picked up again, making capturing the Intelligence harder. Additionally, if an Intelligence carrier does not have a Powerup, they will receive health regeneration equal to 0.1x the class base health regeneration. Flags will become poisonous and mark the carrier for death 90 seconds after having been stolen. If both teams' flags are stolen and poisonous, they will return when next dropped. Unlike a normal CTF game, capturing the Intelligence awards the player with 5 points on the scoreboard as opposed to the standard amount of 2 points, and a team that captures the Intelligence does not receive the 10 second critical hit boost. Flag carriers have their grapple movement speed reduced. The speed reduction is higher with a Powerup and is lesser on Scouts and players using the Agility Powerup.

If a player does not have a Powerup equipped, they will see a glow around powered-up enemies below 30% of their max health. There isn't a limit to the range of this glow, as long as the player maintains a clear line-of-sight with the enemy.

All melee weapons do an additional 30% damage, unless the attack mini-crits or crits. Demomen equipped with a shield do not receive this bonus. Additionally, the shield charge meter passive refill rate is reduced, and reduction is greater when carrying a Powerup. Items or actions that add to the shield charge meter add less when carrying a Powerup. Medics have a reduced heal rate of 75% default rate if either he or his heal target has a Powerup, and 50% default rate if they both have one. Heal targets with Powerups cannot be overhealed. The Ubersaw grants 10% ÜberCharge instead of the standard 25%, and 5% ÜberCharge if the Medic has a Powerup. Engineer's Buildings deploy much faster, and Scouts do not take Fall damage. The Battalion's Backup takes 1500 damage to fill instead of the usual 600.

If a player's kill count is very high relative to the other players in the match, they'll enter a dominant state for a brief time. During this state, the player is marked for death when carrying a Powerup and their collected Powerup is less effective.

In Mannpower, the player can collect multiple different Powerups that spawn around the map. When a powered-up player dies, the Powerup will be dropped in the enemy team's color. Neutral Powerups can be collected by any team, while team-colored Powerups can only be collected by the team that the color matches from the Powerup or disguised Spies (however, Spies can't collect the enemy's "Revenge"). In Casual Mode, only one instance of each Powerup is available (with the exception of each team's Revenge). If a Powerup isn't picked up in time, it will despawn and appear somewhere else. Team-colored powerups will try to respawn in the base of its own team, or as close as possible. Neutral Powerups spawn in a random location. The current in-game Powerups are:

When a Mannpower map loads, RED and BLU team are given an invisible score counter that is automatically set to 0. For every kill a player scores with a powerup equipped, the server adds 1 to that team's counter. If the difference between RED's and BLU's score is greater than or equal to 24, the map is told to run imbalance measures. This involves spawning the Revenge powerup in front of the losing team's spawn, and/or swapping two players between teams based on their skill rating. Imbalance detection and imbalance measures are unrelated to Dominant status.

As of the October 1, 2020 Patch, a new feature exists named Dominant status. This feature was implemented to prevent players from going on very high killstreaks -- a common occurrence in Mannpower. In 5 minute intervals, the server tests to see if any player is applicable to receive Dominant status. When the number of kills a player gets in these 5 minutes exceeds 3 times the server median number of kills, they will be given Dominant status. Dominant status lasts for 10 minutes by default. Under the effects of Dominant status, players are marked for death while they have a powerup equipped, and the stat boosts of any equipped powerups are nerfed. A player entering dominant status is indicated to the enemy team by the message "An enemy player is dominating the game. The playing field has been leveled in your favor." in chat.

Sources of health regeneration unique to Mannpower use a unique healing mechanic which scales in speed depending on the class being healed. Health is regenerated every 0.25 seconds and the green health number displayed is exactly half of the health added. The base healing rate of each class is as follows:

Mannpower has four compatible maps and does not have a specific prefix; community maps are identified with an italic font.