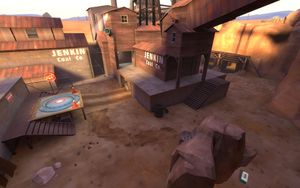 cp Dustbowl
This article is about the game mode. For the physical objective, see Control Point (objective).

Control Point (CP) is a "main" game mode, consisting of 4 of the original 6 maps. The game revolves around capturing and defending various control points.

Control points are captured by standing on top of them. The speed at which a control point is captured depends on how many players from the capturing team are present on the point: two BLU players capturing a RED point will capture that point faster than only one BLU player would. Scouts count as two players, as do Soldiers and Demomen wielding the Pain Train. There is a limit on how fast a Control Point can be captured (see Control point timing).

If players from both teams are on the same, unlocked control point, that point is said to be contested, which means no progress is made toward the point changing team control. When players from the offensive team are removed from the point, all of their progress is lost gradually over time, not immediately. 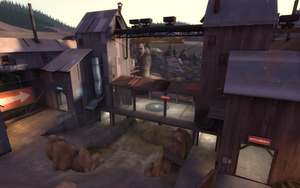 Attack/Defend maps, also known as Asymmetric Control Point maps, play asymmetrically, with BLU attacking and RED defending. RED begins with control of all of the points. BLU wins if they capture all of RED's points; RED wins if they prevent BLU from capturing all of the points before the timer expires. Control points may only be captured in a set order (with the exception of some maps, such as Gravel Pit and Steel). Points captured by BLU are locked and cannot be taken back by RED, and time is added after each capture. Because of its simpler format that concentrates on one point at a time, Attack/Defend is easier for newcomers to play.