From Team Fortress Wiki
Jump to: navigation, search
This article is about fire produced by weapons. For environmental fire, see this article.

Fire, or flames, refers to the special projectiles produced by the primary weapons of Pyro. It can cause the damage-over-time effect inflicted on a player, which is called afterburn.

Fire has its own damage type, and some other weapons which are not the primary weapons of Pyro can also cause fire damage and afterburn.

Flames produced by the primary weapons of Pyro

The Pyro has two different primary weapon types: the conventional Flame Throwers and the Flame Launcher. Although they all visually produce a stream of flames, the mechanics behind the visuals are different.

The stock Flame Thrower and its variants share the same flame mechanic. Upon pressing primary fire key, it produces multiple little invisible projectile-like boxes, which can be called flame particles. When one of these particles makes contact with an enemy player's hitbox, a straight line is drawn from the point of firing to the center of the particle which made contact. if there are no environment elements in between the two points, the hit is registered by the system and damage is applied. Unlike normal projectiles, flame particles do not stop when they collide with players or buildings, but instead continue moving and dealing damage to other objects until their maximum lifespan is reached. The particles have their damage largely determined by time since being fired rather than distance. One flamethrower ammo fires two flame particles.

The momentum of the boxes is partially determined by the firing Pyro's movement. When a player is moving, the velocity of the player at the time of firing a particle is added to that particle's inherent movement in the player's moving direction. Therefore, moving forward increases forward particle velocity, so the total range increases. Strafing backwards while firing forwards will add negative velocity to inherent movement, and this will result in a particle's initial forward velocity being slower. As inherent forward velocity decreases, inherited velocity begins to catch up and exceed it; the particle will come to a complete stop before accelerating in the opposite direction. This is helpful for the Pyro to counter its chasers.

The item kind Flame Launcher only includes the Dragon's Fury. Although being a new weapon type in the Pyro's arsenal, the fireball It launches is more similar to the normal projectiles. The Dragon's Fury can launch a quick, short-range (526 HU) fireball that travels 3000HU/s. Its momentum will not be influenced by the movement of the player, but it can still penetrate players and buildings just like the normal flames particles. Each fireball inflicts around the same damage as a Flare Gun shot, and causes enemies to suffer Afterburn for a short time, even enemy Pyros (albeit for a slightly shorter time than for other classes). Hitting an enemy that is already on fire deals triple damage, so long as the middle of the "fireball" connects. 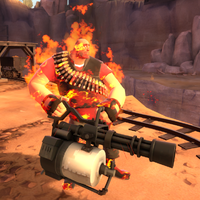 A Heavy on fire.

Upon being set aflame, a player's character will automatically scream out that they are on fire, alerting nearby Medics and teammates to their plight. Setting an opponent on fire also creates a disorienting effect on their screen view (flames will engulf the edges of the screen and a burning sound is heard). This can be used to a team's advantage if the Pyro is able to ambush a group of attacking foes. Snipers lit on fire will find it extremely difficult to aim, as the scoped view will move every time the Sniper takes damage from the burning (an effect the Sniper can prevent while fully-charged by equipping the Cozy Camper). When calling for a Medic, the balloon with the Medic symbol will be on fire, notifying a Medic that his teammate is being damaged by afterburn. This helps prioritise burning players as an urgent healing target.

Afterburn can be used to Spy check. A small burst of flame will ignite an enemy Spy, even if cloaked or disguised. Burning players give off an additional coloured particle effect revealing their true allegiance; this is a useful effect for distinguishing disguised Spies from teammates.

Afterburn from certain sources can be used to disrupt healing from the various mediguns and shield resistance from the Vaccinator. Afterburn from these sources reduces Vaccinator resist shields by 20%; healing from mediguns, Medicating Melody, or level 3 dispensers by 50%; and healing from level 1 or 2 dispensers (including Payload carts and such) by 100%. Most of these effects remove afterburn after only a second, though, so this isn't always noticeable.

The fire effect starts immediately upon damage from a weapon that causes it. Afterburn damages a player every half-second for 4 HP each tick (1 HP each tick for the Degreaser), totaling 80 damage over those ten seconds (20 damage for the Degreaser). Each fire effect from a flamethrower can last up to 10 seconds, afterburn duration will ramp up from 3 to 10 seconds based on how long the target was in direct contact with the flame. Flare guns and burning arrows apply 7.5 seconds of afterburn, while the afterburn from the Cow Mangler 5000's charged shot lasts 6 seconds, and afterburn from Huo-Long Heater's ring of fire lasts 8 seconds. Additional hits from these weapons will restart the duration of the afterburn.

Afterburn damage cannot crit; however, it can mini-crit if the target is under a mini-crit debuff, such as being covered in Jarate, marked for death, or if the attacking player is buffed by the Buff Banner.

While afterburn duration may stack from multiple sources and players, the damage does not; only the most recent weapon to cause afterburn (and its owner) is considered to be the cause of the burning. This can change how much damage is dealt if the Degreaser (with its reduced afterburn damage) is involved.

Note that enemy Pyros cannot be set on fire (as Pyros are normally immune to afterburn), except by the Dragon's Fury and the Gas Passer. While Pyros still take contact damage from direct flame attacks, they will not take further damage over time. The Pyro does, however, count as on fire for a brief second while he appears with the charred graphical effect after taking damage from a fire-inducing weapon, and while the Pyro takes no additional damage, the Pyro can still suffer critical hits from the Sun-on-a-Stick and Flare Gun, and mini-crits from the Detonator, Scorch Shot, Axtinguisher, and Postal Pummeler. A Spy disguised as a Pyro from either team, however, will still be lit on fire and take afterburn damage.

It is possible to allow gibs to catch fire (if a player is gibbed while on fire) with the cl_burninggibs command set to 1.

The following will extinguish a player who is on fire:

The following methods do not extinguish the afterburn, but can help burning players survive by healing faster than the afterburn can deal damage or by mitigating afterburn's damage:

The following weapons provide additional resistance or vulnerability against fire-based attacks. Note that both contact damage (barring the melee damage from the Sharpened Volcano Fragment) and afterburn damage is modified.