The Horseless Headless Horsemann, the undead form of Silas Mann, is a neutral enemy that appears in Mann Manor, the Carnival of Carnage, and the community maps Hellstone, Brimstone, Gravestone, Graveyard, Slasher, and Bonesaw. In Mann Manor, approximately every 8 minutes, he spawns at the currently contested control point and hunts down players from both teams. He has a great deal of health, deals devastating damage in a single attack, and continues to rampage until defeated by the players. In the Carnival of Carnage, he spawns in the Bumper Car Soccer and Falling Platform bumper car games after a certain amount of time, carrying the Necro Smasher instead of his normal weapon. On Hellstone, he spawns when the BLU Team captures the second point, and there is a modest chance of him spawning in any game on Brimstone, Gravestone and Slasher.

The Horseless Headless Horsemann is referred to as "Team Fortress's first boss monster" on the official Scream Fortress Update page. 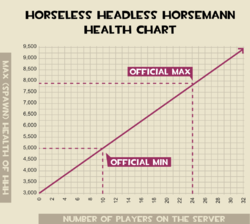 Damage graph showing the number of players vs. the health of the Horseless Headless Horsemann.

The Horseless Headless Horsemann is classified as part of the map's environment; any kills made by him count as environmental deaths for the victim. On-hit effects, such as the charging of the Buff Banner, healing provided by the Black Box, or the L'Etranger refilling Cloak, do not trigger upon a successful attack against the Horsemann. Additionally, the Horseless Headless Horsemann is completely immune to all status ailments, such as Jarate, slowdown, or bleeding. He is, however, affected by critical hits and damage ramp up/fall off.

The Horseless Headless Horsemann will designate any player on RED or BLU as "it" if they are within 1500 Hammer units of the current Control Point that BLU team needs to capture. if there are no players within this 1500 Hammer unit range, he will stand at the Control Point.

The player designated as "It" is notified via an on-screen message and marked with a floating white skull and crossbones icon. The Horseless Headless Horsemann changes targets if "It" is killed, to whoever killed "it", unless they are far away enough, is more than 2000 Hammer units away from the currently contested Control Point, gets Übered, or is in an area inaccessible to the Horseless Headless Horsemann, such as the respawn room. Additionally, a player can hit an enemy with a melee weapon to pass the "It" status to them, in a manner similar to tag.

These sounds play during the event:

‡Accompanied by a notification Popup. 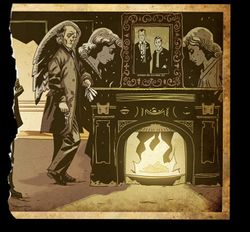 Presumably Silas Mann in the Mann family portrait. Notice that he is holding keys and that something is burning in the fireplace.