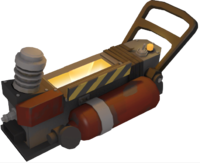 The Reanimator is a gameplay element released within the Two Cities Update to be used on Mann vs. Machine maps. It is automatically dropped by a teammate if they die, displaying a hologram of their class at their point of death. Once it is targeted with any Medic secondary weapon, the player will be slowly revived; upon being fully revived, which involves healing them to half their maximum health, they immediately respawn by the Medic. An ÜberCharge of any type will quicken the process. The player also has the choice to decline being revived, and choose to respawn normally; once the player respawns, their Reanimator disappears. The more teammates die after being revived by Medics, the longer it will take to Medics revive their teammates. Therefore, it is sometimes better to not use the Reanimator and just respawn normally, if it's too difficult for the Medic to revive teammates.

Revivals performed during Setup apply to this penalty for the incoming wave. The penalty still applies even if the player switches Classes (during Setup time). The amount of time to be revived is reset between waves, regardless of whether the wave lost or won.

Excluding the Pyro, each class gains additional voice responses upon being revived.

Various Medi Guns can drastically speed up the revive rate: