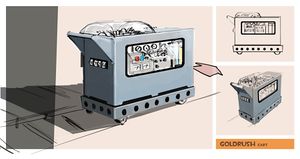 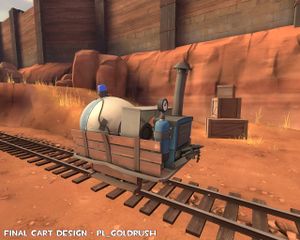 The cart runs into The Tunnel as described above, takes a sharp right then left to come into the open and run alongside The Ditch, past the bridge and around to the right to the checkpoint which is located on the back of the RED Spawn. The locations will be described from RED's perspective.

The other connecting passage is to BLU's far right and leads to two open levels right next to The Ditch. From these levels you look across to the right of the level (RED's perspective) and you can only see the a small part of the second level of RED's Spawn. This lets you rain down fire on anyone taking the bridge over the ditch or anyone in the open space. Be careful because even though The Ditch prevents anyone from walking back into this area, Soldiers and Demomen can rocket jump/sticky jump up, while Scouts can double jump up to surprise you. 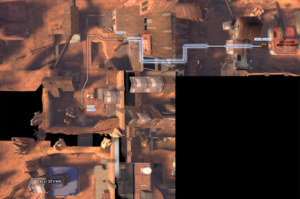 Stage B contains 2 checkpoints that BLU must reach. 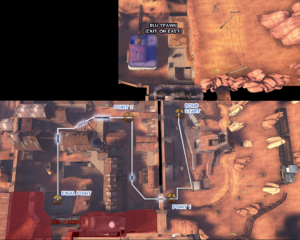 From the checkpoint the track runs straight through and alleyway surrounded by buildings on both sides.

From checkpoint 2 the cart runs through more buildings until reach the checkpoint which gives entry way to RED's final yard. Reaching Checkpoint 3 means victory for BLU, as well as a nice massive explosion to satisfy the victors.