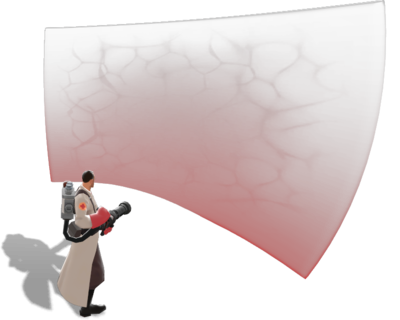 The Projectile Shield is an upgrade function for the Medic's secondary weapons available through the Mann vs. Machine Upgrade Station. This upgrade costs 300 credits and has two levels. Purchasing the first upgrade permits the Medic to build up an Energy charge by healing teammates for activation of the Projectile Shield. When activated, a glowing shield appears in an arc in front of the Medic, blocking most enemy attacks through it and damaging any Robot it touches. The second upgrade increases the shield's width and doubles the damage dealt.

When a Medi Gun is equipped after the Projectile Shield upgrade, an additional Energy charge bar appears next to the ÜberCharge bar. The Energy bar fills much faster and from more sources than the ÜberCharge. The Medic may build Energy by healing damaged teammates, Overhealing teammates, healing teammates who are damaging Robots, blocking teammate damage with Invulnerability ÜberCharges, or Reanimating fallen teammates. A beep cues the Medic player when charge is complete. When Energy is fully charged, pressing the Special-Attack key (attack3) deploys the Projectile Shield for many seconds.

Projectile Shield activation normally does not interfere with the normal operation of the Medic's secondary weapons; the beam can continue to Heal or Reanimate, Canteens can still be shared, and the ability to build and activate ÜberCharge continues. However, Medic cannnot start to heal the patient if the patient stands behind the Projectile Shield of another Medic. 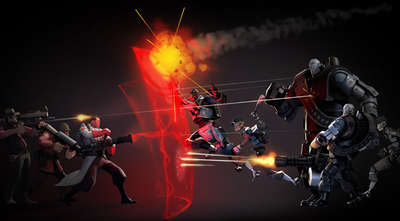 However, a few bugs may decrease effectiveness of the Projectile Shield. For example, some projectiles that would normally be blocked by the Projectile Shield can pass straight through on rare occasions, usually when the Medic is moving forward.[2] The shield also doesn't block deflected projectiles, such as rockets (including sentry rockets), grenades, arrows and other types of them.

The Projectile Shield cannot block attacks from any of the Pyro's primary weapons, the Pomson 6000, the Righteous Bison, or these following weapons when they possess the Projectile Penetration upgrade: Huntsman and its reskins, Rescue Ranger and Crusader's Crossbow with its reskins. It is also unable to block splashes from Mad Milk, Jarate, or the Gas Passer.

If the Medic with his Projectile Shield deployed gets too close to a robot, it is able to damage him. However, it is possible to avoid this by moving the shield closer to the Medic, which is done by looking up or down.

Projectile Shield charges by healing and overhealing teammates, by healing yourself with the Quickfix uber, by charging Reanimators (including instant charge from the Vaccinator's uber), by any damage dealt by patients (including self-damage), or taking damage by yourself or by Medic's patient which is being under Medi Gun's Ubercharge effect. 400 points of healing, 4000 points of patient's damage or approximately 800 damage blocked by Medi Gun's Ubercharge (either by Medic or his patient) is needed to completely charge the Projectile Shield. Shield recharge rate is doubled when healing reanimators. Applying Vaccinator's Ubercharge on the Reanimator will instantly recharge Projectile Shield's, the value of charge depends on Reanimator's health amount. Healing from the Crusader's Crossbow or Mad Milk Syringes upgrade does not count toward shield charge.

A limit exists for how much a patient's damage can charge the Projectile Shield at once. Only the first 250 points of damage on each hit on a single target counts for the charge. For example, if a rocket does 300 points in a direct hit on one Robot, only 250 damage points count towards the charge. But if a rocket splashes 300 damage on each of three Robots, charge gets 750 points (250 + 250 + 250), because the resulting value of charge is an addition of all charge values from every target. In contrast, each of Heavy's Minigun bullets and Pyro's Flamethrower particles count as individual hits, allowing these attacks to avoid this limit.