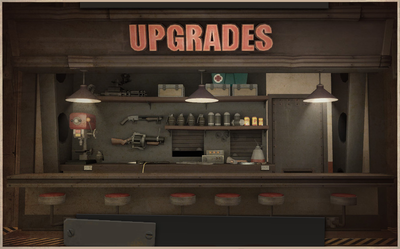 An Upgrade Station is a place for players to buy weapon upgrades, abilities, and Power Up Canteen buffs in Mann vs. Machine. Players may access any kiosk in the base at any time to purchase upgrades with collected credits. The cost of each upgrade does not increase with a repeated purchase. Between waves, players may modulate the number of levels in an upgrade by pressing the + and - buttons to redistribute their credits if they have made a mistake before accepting the upgrade. Once accepting the upgrade it cannot be revoked unless all upgrades are refunded.

Upgrades cannot be refunded during a wave. During the first wave, upgrades can be individually refunded by pressing the minus button to regain the money spent for it and forfeit the upgrade. This includes missions where there is only one wave, such as Caliginous Caper. During any wave, the button to refund is grayed out, preventing a full refund of every upgrade.

During the setup of the first wave of the mission, upgrades can be sold back if the player wants to change weapons, classes, or buy a different upgrade. During the setup for each wave, players may refund their upgrades in the upgrade station menu as many times as necessary. A wrench icon (

) appears next to a class in the Class Selection Menu if that class already has upgrades applied to it. Upgrades apply to only a single weapon or to a single class if the upgrades purchased directly affect the player. Un-equipping a weapon deactivates all upgrades associated with that weapon, but they are regained if the player re-equips it. Disconnecting from a server and rejoining allows the player to retain their current amount of credits and upgrades if the player chooses the same class.

Failing to complete a wave refunds the credits spent during the setup of that wave to give the player a chance to use a different strategy. It does not refund every upgrade gained across every wave.

Since there are no Resupply Cabinets in the base, purchasing an upgrade from an Upgrade Station restores the player's health and ammo. Players cannot heal using the Upgrade Station during waves and may only refill their ammo across all weapons.

Upgrade Stations are accessed by walking up to them. By default, the primary weapon slot is selected. The UI automatically shades upgrades in a slot if the player cannot afford them. Players may hit the "Cancel" button at any time or simply walk away from the kiosk before accepting an upgrade to regain the credits used during the session.

These are available only to the Engineer.

These are available to any class with a Power Up Canteen, Battery Canteens, or Kritz or Treat Canteen in their Action Slot. Canteens can have a maximum of three charges and only one charge type at a time.

Note certain weapons cannot be upgraded. These include: