Steel is an official community-made complex Attack/Defend Control Point map, added in the Heavy Update. Steel is one of many community maps added to the game by Valve as honorary official maps due to their high quality.

Unlike most Control Point maps, capturing a control point modifies the layout of the map, opening, and closing routes for each team. As a result, the offensive team has a wide variety of tactical choices to influence how they play, including:

Unlike normal linear Control Point maps, Steel allows the attacking team, BLU, to capture the final point, no matter how many other points have been captured. However, the more points BLU captures, the more ways they can access the final capture point, as well as pushing back the RED team's spawn and closing off their routes. One point and 3 minutes of time are awarded for each point captured. If E is captured, then the BLU team scores 5 points overall for the round, regardless of how many of the preceding points were captured. 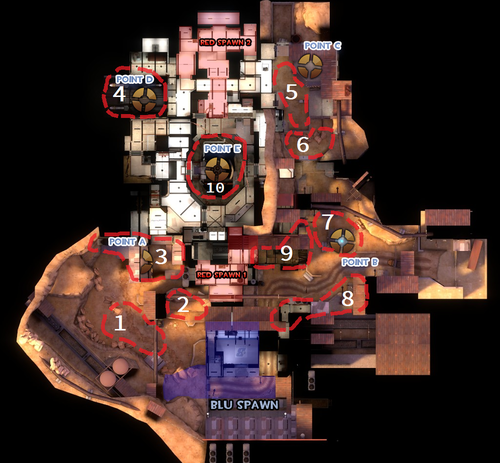